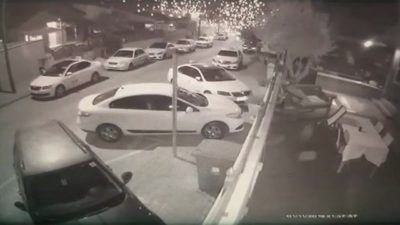 Israeli sources reported that Palestinian resistance groups fired around 8 rockets across the border from Gaza into Israel Friday night, with one of the projectiles causing slight damage to a house in southern Israel.

Israeli residents of the town of Sderot reportedly ran into bomb shelters as a siren sounded throughout the town, warning of ‘rocket fire’ from Palestinians.

According to the Israeli military, seven of the eight projectiles fired by the Palestinian resistance on Friday night were intercepted by their anti-rocket ‘defense’ system, Iron Dome.

The projectiles were fired around 9 pm, according to local sources, and Israelis in the town of Sderot went into shelters following the sounding of the siren in the town.

Israeli medics reported a single injury during the incident: a women who tripped and fell during the rush to the underground bunker.