Israeli Soldiers Attack School, Abduct A Child And Injure Many, In Jerusalem 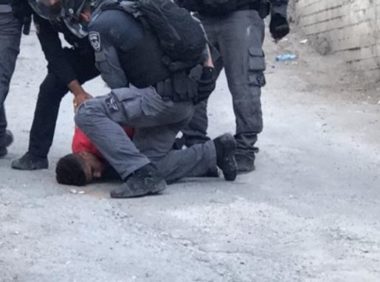 Israeli soldiers invaded, on Saturday morning, a Palestinian school in the al-‘Isawiya town, in occupied East Jerusalem, and abducted one child, in addition to causing many others to suffer the effects of teargas inhalation after throwing gas bombs into their school.

Media sources said the soldiers abducted Saleh Tawil, in the al-‘Isawiya Secondary School for Boys, and took him to an unknown destination.

They added that the soldiers fired gas bombs, in addition to hurling gas grenades into the campus, causing many children to suffer the effects of teargas inhalation, the Wadi Hilweh Information Center in Silwan (Silwanic) has reported.

On Friday evening, the soldiers detained a Palestinian groom and his bride, after stopping their car at the Container military roadblock, north of Bethlehem.

The groom and his bride were detained at the roadblock for more than an hour, before the soldiers allowed them to leave. The army did not provide any reason for its soldiers’ actions.