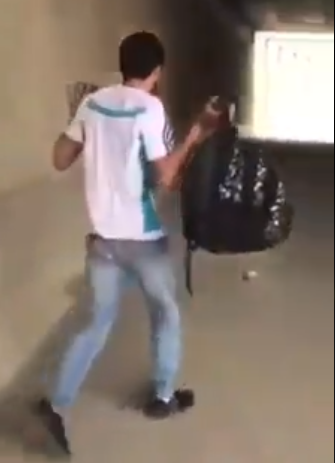 A video taken by an Israeli border patrol officer 18 months ago was released on Israeli television Saturday, and it shows a soldier shooting an unarmed Palestinian with his hands up in a tunnel road in the West Bank.

The 26-second clip shows a Palestinian man holding up his hands and walking away as two soldiers shout at him. Then one of the soldiers shoots the Palestinian in the leg.

It was released on Israeli channel 13.

The Palestinian man appears to be complying with the Israeli soldiers’ orders when he is suddenly shot, and collapses to the ground.

According to Israeli media sources, the Border Police stated that the border officer responsible for the shooting was kicked off the force once the incident was discovered.

But the officer has, according to Israeli sources, been sent to be part of the Israeli military occupying the West Bank, while this incident is being investigated.

The Palestinian victim in the video has not been identified by the Israeli Border Police. It is not clear how badly he was injured by the shot.