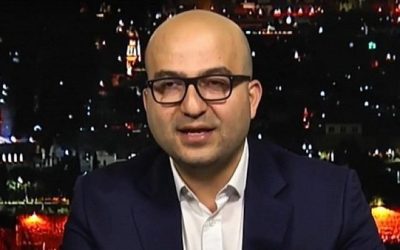 Updated: The Israeli Minister of Jerusalem Fadi al-Hidmi, was one of eight Palestinians abducted by Israeli forces in pre-dawn raids on Sunday.

Israeli troops stormed the neighborhood of Suwwana, in occupied Jerusalem, and abducted Fadi al-Hidmi, a Palestinian community leader who is a member of the Palestinian government that has worked through non-violent means to assert their sovereignty in the city.

While invading al-Hidmi’s home Sunday before dawn, eyewitnesses reported that the soldiers beat, humiliated and brutalized the government minister in front of his family and children before dragging him away.

This is the third time that al-Hidmi has been singled out for arrest by Israeli authorities, who claim they have the jurisdiction to arrest Palestinians in the city of Jerusalem – in violation of international law and the Fourth Geneva Convention regarding the rights of occupying powers.

In addition to abducting him, the Israeli authorities have also summoned him for interrogation on at least 12 occasions.

In the area of Khallet Hadour in Hebron, in the southern West Bank, Israeli troops abducted Mo’men Abu Shamsiya and Ahmad Al-Yamani.

The Israeli forces also abducted Daoud Zakaria Mousa after they raided his family’s house and searched it in Al-Khader village south of Bethlehem.