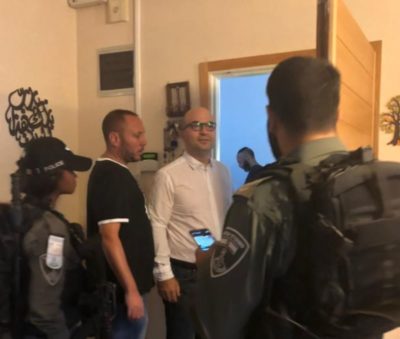 The head of the Public Relations Department at the Palestinian Ministry of Jerusalem Affairs, Awad Awad, told the Palestinian News & Info Agency (WAFA) that many soldiers, police and Internal Security officers, invaded al-Hidmi’s home, and violently searched it.

It added that the soldiers abducted him after interrogating him and his family while inspecting their ID cards.

Furthermore, the soldiers invaded the home of Jerusalem Governor Adnan Gheith, in Silwan town, south of the Al-Aqsa Mosque in Jerusalem, and summoned him, along with his son, for interrogation.

In related news, the soldiers prevented the Palestinian Minister of Social Development, Ahmad Majdalani, from entering Jerusalem, and threatened to abduct him.