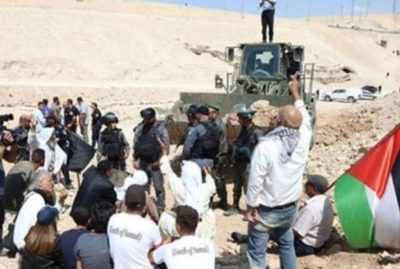 Israeli soldiers invaded, Wednesday, the Sawahra town, east of occupied East Jerusalem, and removed a protest tent, which was installed by locals and international peace activists, to protest the establishment of a new illegal colonialist outpost in the al-Mintar Mountain, east of the town.

Eyewitnesses told the WAFA News Agency that the soldiers invaded the area, and forcibly removed the nonviolent activists from the tent, and removed it.

They added that the army invaded the area a week ago and informed the nonviolent protesters of its decision to demolish and remove the tent.

It is worth mentioning that, on September 15th, illegal Israeli colonialist settlers installed several mobile homes and water tanks on the mountain, in preparation for establishing a new outpost on the Palestinian lands. The army did not attempt to remove it.