Israeli Soldiers Demolish A Home, Assault The Family, In Jerusalem 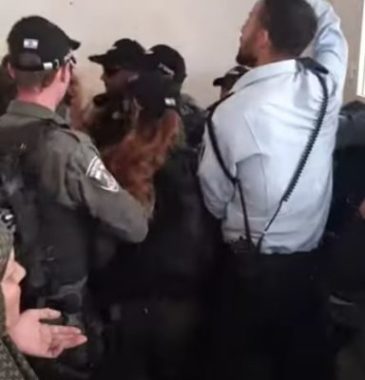 Workers of the City Council of occupied East Jerusalem and Israeli soldiers demolished, Tuesday, an under-construction Palestinian home in the at-Tour town, allegedly for being constructed without a permit, and assaulted the family before detaining two of them.

Resident Abu Issa Khalil said the soldiers, and personnel of the City Council stormed the home after surrounding and isolating it, and assaulted his family, before abducting his sons Qussai and Issa.

It is worth mentioning that the two detained sons were interrogated for several hours at a detention facility, and were released under the condition of being forced out of Jerusalem for 48 hours.

He added that the soldiers alleged that his sons “assaulted them”, while they were forcing the family out, and attacked his other son, Odai, causing various cuts and bruises, before he was rushed to a hospital in Jerusalem.

The Palestinian stated that the soldiers demolished his residence using handheld tools because it is on the top third floor.

Khalil also said that the City Council recently informed him that he has until Monday evening to demolish the residence, and he demolished its rooftop, however, the soldiers invaded the area, Tuesday, and demolished the remaining walls.