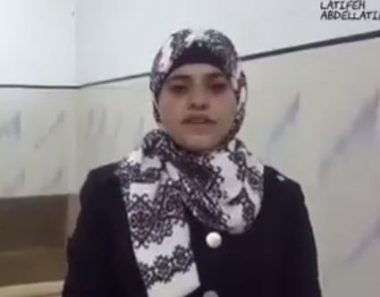 Israeli soldiers, and police officers, invaded on Monday at dawn, the ar-Ram town, north of occupied East Jerusalem, and broke into the home of Misbah Abu Sbeih, who was killed Sunday after carrying out a deadly shooting attack in Jerusalem, and detained his daughter, Eman, only 14 years of age. The invasion into the property was the second in a few hours.

The family said the soldiers violently searched the property, before taking Eman to the al-Maskobiyya detention and interrogation center.

The invasion led to clashes between the soldiers and dozens of local youngsters, who hurled stones on the military vehicles, while the soldiers fired gas bombs and concussion grenades.

Eman was taken prisoner after publishing a personal video on her Facebook page in which she said “she was proud of her father, who died a martyr.”

She said that she prayed with her father, on Sunday at dawn, before he left home in order to serve a four-month prison sentence, for “trying to prevent soldiers and settlers from invading the courtyards of the al-Aqsa Mosque.”

The daughter added that she and her family said goodbye to him at dawn, believing he was going to prison for four months. He was killed after fatally shooting an Israeli officer and a woman.

She also stated that she asked her father whether she should visit him while in prison, but he said that she, her sister and brothers, should take care of their studies, and do well I school.

“We are proud of our father; I always prayed with him, including on Sunday at dawn in our home,” she said, “He also said goodbye to my sister, and asked my brothers and me to study well, and to do good, while he serves his prisoner sentence…”

“He was imprisoned many times, sometimes for eight months, a year or two, so it became an ordinary part of our lives” she added, “He carried out a shooting operation, killing two Zionists and wounded eight, thank God…”

It is worth mentioning that the soldiers invaded the family home and took measurements of the property in preparation for demolishing it.

The soldiers also invaded and searched many homes belong to relatives of Abu Sbeih.

On Monday at dawn, the soldiers invaded, Tulkarem city, and Tulkarem refugee camp, in the northern part of the occupied West Bank, kidnapped one Palestinian and injured several others, including a child.

Also at dawn, several military jeeps invaded the town of ‘Azzoun, east of the northern West Bank city of Qalqilia, broke into and searched dozens of homes, and kidnapped ten Palestinians.

On Sunday evening, undercover soldiers of the Israeli army invaded the at-Tour town, in Jerusalem, and clashed with local youngsters, before firing gas bombs, causing scores of residents to suffer the effects of teargas inhalation.