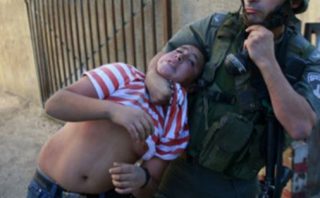 The Palestinian Prisoners Society (PPS) managed, Thursday, to obtain an acquittal for an imprisoned Palestinian child, who was kidnapped by the army 45 days ago, as he was returning home from school.

PPS lawyer Elia Theodory said the acquitted child, Abdullah Mohammad Fayez Qassem, 15, from the central West Bank district of Ramallah, was kidnapped on May 12th, while heading back home from school.

He added that the Israeli military prosecutor based its allegations on testimonies of soldiers who abducted the child, after claiming he hurled stones on their military jeep, but were inconsistent in their statements.

The court decided to keep the child imprisoned for two more days, to give the military prosecutor time to determine whether to file an appeal.