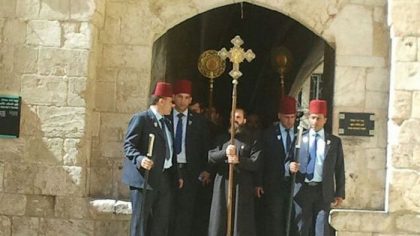 A group of Israeli extremists assaulted the Pentecostal prayer procession in Jerusalem this week, shouting and trying to occupy Mount Zion to keep the Christians out.

The Israeli police arrested five demonstrators who locked themselves in the holy site known as King David’s Tomb before the Christian procession arrived.

The protesters consisted of right-wing religious Jewish Israelis who wore traditional Jewish yarmulkes on their heads as they screamed and shouted at the Christian worshipers, and tried to physically attack them.

Israeli police blocked the crowd of several dozen demonstrators, but some got through and hit some of the Eastern Orthodox Christian worshipers, according to local sources.

The Pentecostal procession is an annual event in which Eastern Orthodox Christians pray at the presumed site of the Last Supper.

According to the Israeli paper Ha’aretz, one ultra-Orthodox protester who identified himself as Tzvi told them, “It hurts me that they are letting these goyim (non-Jews) come here. It hurts me that these evil men, who have oppressed the Jews throughout history, are being allowed to contaminate our holy sites. And it hurts me even more that the police, led by our Jewish government, are allowing them to do so.”

Although King David’s Tomb is supposed to be open to people of all religions to pray, it has unofficially been turned into a synagogue, and Jewish rabbis prevent any non-Jews from entering, apart from five times a year when Christians are allowed to enter to commemorate holy days.

As the procession, consisting of many members of the Eastern Orthodox hierarchy, made its way up Mt. Zion to the Room of the Last Supper, the Israeli protesters shouted, “We will tear down this abomination! You are evil!”

The Christian elders and brothers stayed in the tomb only a few minutes, and were met by loud booing and hissing the whole time. As they left, the Israeli daily Ha’aretz reports that one ultra-Orthodox demonstrator shouted, “The goyim got their way this time. But they won’t the next time. King David lives forever! The people of Israel live forever!”