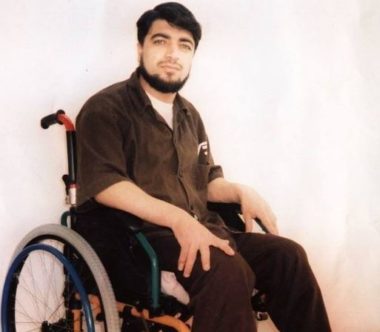 The Palestinian Prisoners’ Society (PPS) has reported, Tuesday, that an ailing, disabled Palestinian detainee, who is held under arbitrary Administrative Detention orders without charges or trial, has declared a hunger strike, demanding his release.

The PPS stated that the detainee, Mo’taz Obeido, who is held at the Negev Detention Camp, was moved to solitary confinement after he declared hunger strike.

It added that Obeido, from Hebron in the southern part of the occupied West Bank, was shot by the Israeli soldiers in the year 2011, before he was abducted, and that the injuries caused paralysis in his left leg, weakness in his right leg, and various complications in his nerves, in addition to serious damage to his intestines, which required surgeries, including a colostomy.

After he was shot and abducted by the soldiers, he was moved to the Ramla Prison Clinic, which lacks specialists and adequate tools, and stayed there for three years.

Obeido requires rehabilitation and constant medications, but the only thing he receives are painkilling pills.

The PPS said that Obeido was previously frequently abducted and imprisoned by Israel, spending a total of eight years behind bars, before he was abducted again this month, and was slapped with an arbitrary Administrative Detention order.