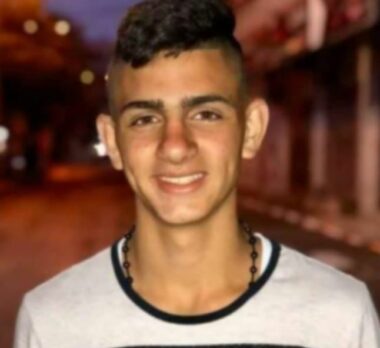 By Zahran Maali for WAFA

9 bullets penetrated the body of the 17-year-old boy, Muhammad Khader Al-Sheikh Al-Naheil, from the town of Al-Eizariya, east of Jerusalem, on August 15, 2019, before his arrest in front of the chain gate leading to the Al-Aqsa Mosque. One of the bullets remains lodged near an artery in his heart, a potential threat to his life.

Tragedy befell the Sheikh’s family when they received the news of the injury of their son Muhammad, and the death of his friend Naseem Abu Roomi, 15, who was shot by the Israeli occupation police, continues to haunt her, amid fears of the deterioration in his health due to the Israeli policy of deliberate medical negligence used against him.

The mother of the imprisoned teen, Sheikh Abeer Oudeh Allah, spoke to Palestinian WAFA News Agency about the conditions of her son’s detention and his health, “They left him bleeding after they showered him with bullets all over his body, and then he was transferred to the Shaare Tseedik hospital for two weeks, then to the Ramla Prison clinic where he stayed for four months,” she explained.

Muhammad is one of the 140 children who languish in the Israeli occupation prisons, distributed in three central prisons, ‘Ofer’, ‘Majdou’ and ‘Damon’, according to a report issued by the Prisoners and Executives Affairs Authority, on April 5, the occasion of the Palestinian Children’s Day.

The injured teen is currently held in ‘Ofer’ prison, however he continues to suffer from severe abdominal pain and constant vomiting as a result of his extensive injuries, yet the prison authorities continue to deny adequate medical care.

Since his injuries, the boy’s mother has only been able to visit him twice, the first on March 19, 2020, and the second on October 29, 2020, when the Red Cross informed her of the Israeli occupation’s denial of her visit, for ‘security reasons’.

Odeh Allah told WAFA that her child now suffers from psychological trauma after his release from the Ramle prison clinic. After witnessing the suffering and woes of the sick prisoners, suffering from cancer and other chronic diseases, some of whom had their feet amputated.

His mother indicates that this is the third time Muhammad has been incarcerated by occupation forces, the first time was when he was 13 for seven days, and then again when he was 15 for eight months, he is currently serving a 10-year prison sentence.

The detention of Muhammad, according to his mother, was the reason for his denial of studies after he was ranked third among students in his class at the orphanage school in Al-Eizariya, but his ambition to excel did not stop, as he is striving to complete secondary school and get his bachelor’s degree during his detention.

According to the Prisoners and Executives Affairs Authority, since the year 2000, the Israeli occupation authorities have arrested more than 16,000 Palestinian minors under the age of 18 years, and more than 85% of these have been subjected to one or more forms of torture or physical and psychological abuse at the hands of the occupation forces.

It is noteworthy that the late martyr Yasser Arafat declared on April 5, 1995, at the first Palestinian Child Conference, his commitment to the International Convention on the Rights of the Child, and this date designated a day for the Palestinian child. Note that the official ratification of the Convention by the State of Palestine was on April 2, 2014.