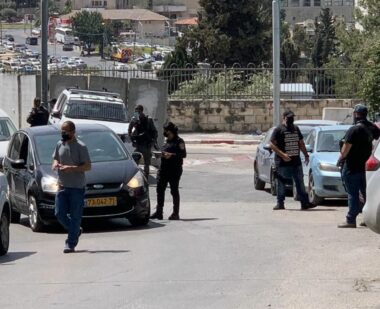 The soldiers installed roadblocks around the Ambassador Hotel in Sheikh Jarrar, in Jerusalem, and prevented members and political leaders of the Fateh movement from holding a meeting in preparation for the upcoming general election.

Several institutions, including various social organizations, were also supposed to be part of the meeting.

Mheisin added that Israel continues to attack the Palestinians who participate in conferences or any political activity in occupied Jerusalem, as part of its ongoing efforts to impose its full control over the city.

It is worth mentioning that Israel has frequently abducted and imprisoned senior political leaders in occupied Jerusalem, including Jerusalem Governor Adnan Gheith, and Fateh Secretary Shadi Mitwer.

In related news, the soldiers abducted, on Tuesday at dawn, five Palestinians, and assaulted one causing various wounds, in several parts of the occupied West Bank.