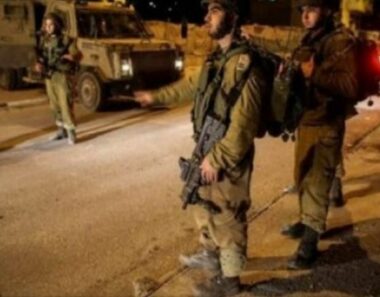 Israeli soldiers abducted, on Tuesday at dawn, five Palestinians, and assaulted one causing various wounds, in several parts of the occupied West Bank.

The soldiers invaded the Hindaza Mountain area, in Bethlehem, south of occupied Jerusalem, before storming homes, and abducted Hasan al-Wardian, 62.

During the invasion into al-Ferdis village, the soldiers stormed and ransacked many homes, in addition to assaulting and injuring Jamal Hashem Abu Mahameed and Nassif Faisal Abu Mahameed.

In addition, the soldiers broke into a currency exchange shop, owned by Johnny Freij, in Nativity Street in Bethlehem city.

Furthermore, the soldiers abducted Mahmoud Nabil Kabaha, from the northern West Bank city of Jenin, after stopping him at a military roadblock near Tulkarem.

Another Palestinian, identified as Ahmad Samer Abu ‘Obeid, from Jenin, was abducted in Jerusalem.

In addition, the soldiers invaded many neighborhoods in the southern West Bank city of Hebron, and searched a home, owned by Jafar Noah Abu Aisha, in the southwestern part of the city, causing damage.