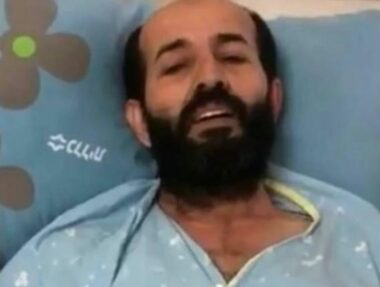 The Palestinian Prisoners Society (PPS) has reported, Sunday, that Maher al-Akhras, a political prisoner held by Israel without charges or trial, is ongoing with the hunger strike for the seventieth consecutive day despite his seriously deteriorating health condition.

The PPS stated that Al-Akhras, 49, from Jenin in northern West Bank, is at Kaplan Israeli medical center, determined to continue his strike, and so far, his demands to be released are constantly met with rejection, although he is not facing charges.

It added that, two days ago, an Israeli court denied an appeal for his release, for the second time since September 23rd when a court “froze” an administrative detention order against them, an issue that simply means such orders are not voided and could be renewed at any moment after he stops his strike.

The detainee suffered a serious weight loss, always fatigued, repeatedly loses consciousness, in addition to being unable to move and suffers repeated seizures but refuses to take any medications or vitamins.

“From his hospital bed, Al-Akhras voiced one message to his lawyer,” the PPS added, “Either freedom or martyrdom.”

He has been abducted and imprisoned by Israel numerous times, including when he was taken prisoner on July 27th, 2020, and was instantly slapped with a four-month Administrative Detention order. Prior to his current imprisonment, al-Akhras was spent for over four years in prisons, including many months under the arbitrary Administrative Detention orders.