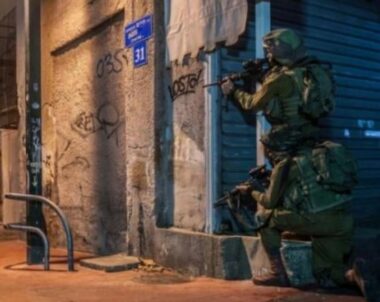 Israeli soldiers shot, on Sunday evening, two children in separate invasions into Palestinian communities in Hebron and Jerusalem, in the occupied West Bank, the WAFA Palestinian News Agency has reported.

WAFA said the soldiers invaded the ath-Thaher area, south of Beit Ummar, north of Hebron, in the southern part of the occupied West Bank, and fired many live rounds, rubber-coated steel bullets, gas bombs, and concussion grenades at Palestinian protesters.

Media sources said a child, 16 years of age, was shot with a live round in his leg, before he was moved to a hospital in Hebron, suffering moderate wounds.

Many Palestinians suffered the severe effects of teargas inhalation before the medics provided them with the needed treatment.

The protests took place near the illegal Karmie Tzur colony, which was built on stolen Palestinian lands.

Eyewitnesses said the child was shot with a rubber-coated steel bullet in the head, in the eastern part of the town before he was rushed to a hospital.