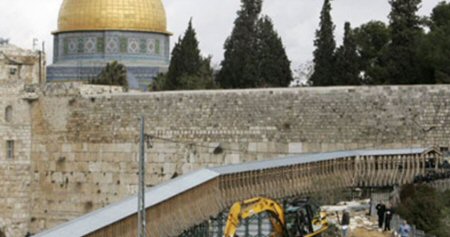 According to the Islamic Awqaf, the Israeli police allowed 30 settlers to enter al-Aqsa Mosque and perform Talmudic rituals near the Bab al-Rahma area, in the early morning hours.

Israeli Temple Mount groups have called for mass break-ins into Bab al-Rahma prayer area, on Thursday, and called for a ban on the work of the Islamic Awqaf in the mosque.

Over a week ago, dozens of Palestinian worshipers and Awqaf officials managed to open the gate of Bab al-Rahma area after 16 years of Israeli closure. Israeli police have arrested many of them and ordered others to stay away from the mosque and the Old City of Jerusalem for different periods.

The Israeli magistrate court in Occupied Jerusalem has given the Islamic Awqaf Council one week to respond to an Israeli request asking it to close the Bab al-Rahma prayer area of the Aqsa Mosque.

According to Haaretz newspaper, the magistrate’s court threatened to issue a verdict ordering the closure of Bab al-Rahma, if the Awqaf Council did not respond to the request filed by Israeli prosecutors.

The newspaper warned that the use of force when closing Bab al-Rahma would lead to another round of violent tension in Jerusalem and the West Bank.

In a related context, right-wing Israeli leaders have demanded that the government build a synagogue inside Al Aqsa Mosque compound.

The Jerusalem Post reported, on Tuesday, that a large group of right-wing figures urged the government to build a synagogue for Jewish prayers.

The newspaper affirmed that leaders also discussed, during a meeting they held last Sunday, the possibility of putting up a sign pointing to the existence of a synagogue inside the mosque compound.