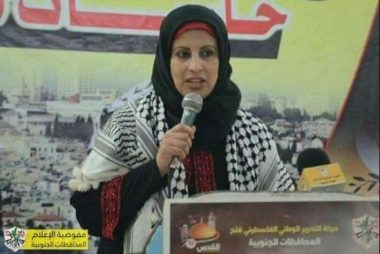 Date: 23 May 2018: By Al-Haq Human Rights Organization: Al-Haq is following with great concern the case of Samah Ibrahim Muhammad Abu Ghayyad, arrested by the internal security apparatus in the Gaza Strip on 9 May 2018, and who has been detained since.

Al-Haq calls on the authorities in the Gaza Strip to comply with the applicable constitutional and legal safe guards, and to respect and fulfil Samah Abu Ghayyad’s fundamental rights as enshrined in international human rights treaties to which the State of Palestine has acceded and which are applicable to the Occupied Palestinian Territory (OPT), including the occupied Gaza Strip, regardless of the grounds and reasons for her detention.

According to information available to Al-Haq, Samah has been detained since 9 May 2018, when officers from the internal security apparatus asked her husband to accompany them to her workplace, from where they proceeded to arrest Samah, confiscate her cell phone and computer, without providing any warrant for her arrest or informing her of the charges against her.

Samah, a mother of six whose youngest child Watan is one year old, is the administrative director of the Women’s Programme Center in Nusseirat refugee camp in Gaza’s Central Governorate, which is overseen by the United Nations Relief and Works Agency for Palestine Refugees in the Near East (UNRWA).

As stated by her husband in an affidavit given to Al-Haq, Samah is a community activist and Fatah leader in Gaza’s Central Governorate.

According to Al-Haq’s field documentation, Samah has not been allowed to meet with her lawyer throughout the period of her detention, despite repeated requests in this regard, the most recent of which was on 20 May 2018, which received no response. For the past fifteen days, Samah’s family, including her husband and children, have not been allowed to visit her.

Al-Haq’s follow up into the circumstances of Samah’s arrest by the internal security apparatus in the Gaza Strip raises concerns that she may be subjected to torture or other ill-treatment, notably as her arrest and detention were carried out in the absence of constitutional and legal safeguards applicable to her, as enshrined in the Palestinian Basic Law and the International Covenant on Civil and Political Rights (ICCPR), to which the State of Palestine has acceded, and considering Samah remains under arrest at the order of the military prosecution.

Accordingly, based on Al-Haq’s field documentation and follow-up: