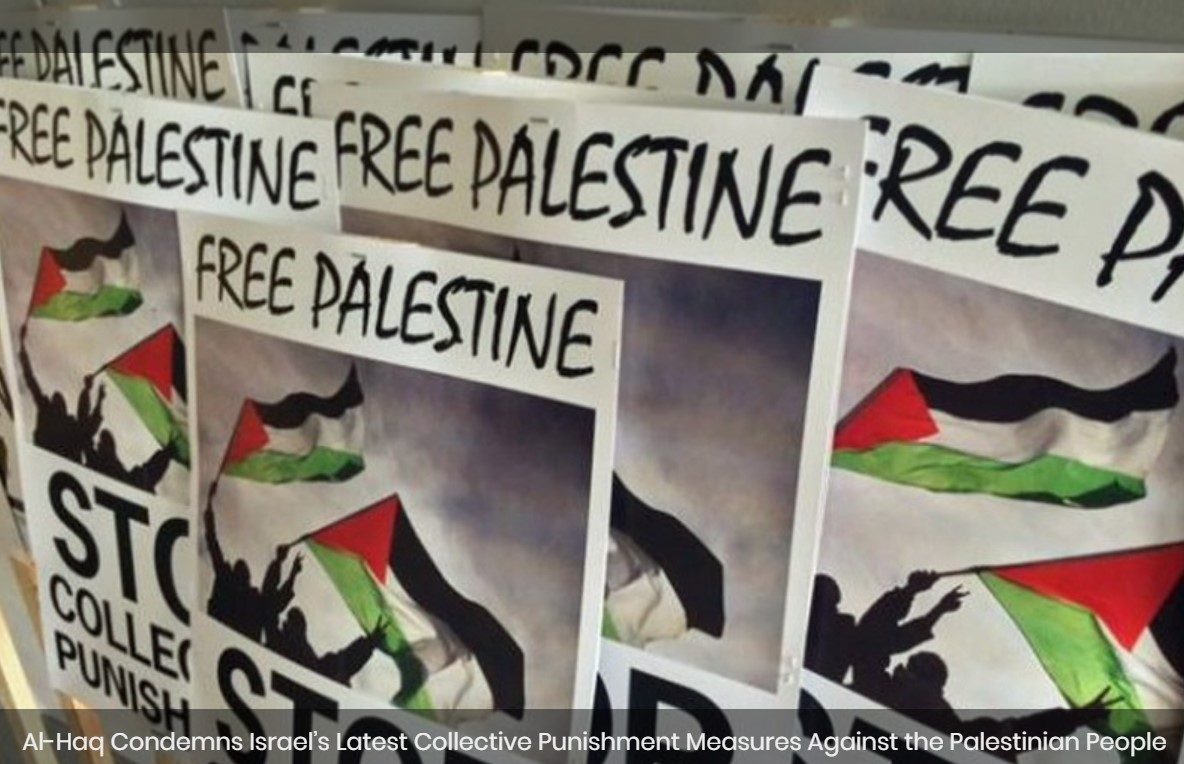 Beginning on 12 October 2022, Israeli Occupying Forces (IOF) have maintained a siege and launched repeated incursions against Palestinians living in the Shuafat refugee camp and in the village of Anata, located within the city of Jerusalem. The entrances to Shuafat and Anata were respectively closed by the IOF, depriving approximately 130,000 Palestinians of their right to movement, work, education, access to medical treatment and worship. These measures are ongoing and Al-Haq continues to monitor the escalating situation.

The closures have stopped 15,000 Palestinian workers from attending their jobs and 15,000 students from going to their schools and universities.[1]

They have also prevented at least 3,000 patients in the besieged areas from receiving required daily medical treatment, including 350 patients in need of dialysis to prevent kidney failure.[2] As an Occupying Power, Israel must ensure that Palestinians have access to medical services.[3]

The prolonged closures, and the resulting restrictions it imposes upon access to essential services, are in violation of Israel’s international human rights obligations to the Palestinian population to provide access to “all basic and life-giving services,” as well as its responsibility to ensure “the free passage of all consignments of medical and hospital stores”.[4]

Even during the limited instances in which occupying forces open checkpoints, all movement is slowly and meticulously inspected, lasting hours and arbitrarily prohibiting passage, regardless of military necessity.

In one instance, on 12 October 2022, an elderly, disabled Palestinian man, in need of urgent medical attention, was turned away at the checkpoint and told that if his urgency to reach a hospital was necessary, he could take an ambulance, an option that is not only cost-prohibitive (costing around 550 NIS), but is in blatant violation of his right to movement and access to medical care.[5]

In another instance, on that same day between 5:00-6:00 PM, the severe overcrowding and delay at the checkpoint prohibited the safe and urgent transportation of a woman in the midst of giving birth, requiring her to be carried through a pedestrian path at the checkpoint, while she was undergoing labor and screaming, “God will help me, the baby will be born. Help me, the baby will be born”.[6] This delay resulted in her giving birth on the road, en route to the hospital.

In addition to the heavy deployment of occupying forces, Palestinians in the besieged areas of Shuafat and Anata witnessed IOF and settlers under IOF protection infiltrate and damage residential buildings and shops, as well as suppress peaceful marches formed by the residents protesting the seige.

[7] Not only are these operations violating fundamental rights guaranteed to the protected Palestinian population under the Fourth Geneva Convention,[8] they are also in serious breach of Palestinians’ right to freedom of expression and freedom of association.[9]

On 11 October, around 1:00 PM, the IOF closed checkpoints leading to the city of Nablus, as well as the roads and entrances to several surrounding towns and villages, imposing a siege on the city after the killing of an IOF soldier.[10] These closures are ongoing. The closures are impeding the areas’ approximately 20,000 Palestinian residents from accessing their places of work and schooling, forcing travelers to the city to take long detours and wait for several hours at military checkpoints, where occupying forces search vehicles and check citizen’s personal identity cards.[11]

The closures have coincided with increasing settler violence, further facilitated by the IOF’s complicity in the setters ’actions. On 12 October, under the protection of the IOF, settlers have attacked and destroyed private Palestinian property throughout the area, including, attacking an ambulance on the road while it was transporting a kidney,[12] stealing fruits and destroying olive trees,[13] and the slaughter of thousands of live poultry belonging to a local Palestinian farmer.[14] On 12 October, in the town of Hawara, near Nablus, settlers burned a park, smashed dozens of windows, and destroyed fifteen stores and twenty vehicles.

These settlers, along with IOF forces, also attacked residents of the area, indiscriminately spraying pepper gas at residents and threw stones at houses and civilians, including a local fire-fighting crew.[15]

In incidents documented by Al-Haq on October 13 and 14, some residents moved to protect themselves and their property against the settlers, when clashes erupted amid heavy gunfire.[16]

In response, the IOF shot live bullets at the residents and launched tear gas, causing several citizens to choke and suffocate.[17]

Israel’s blatant support and maintenance of the violence committed by its illegally transferred settlers against the Palestinian people, is not only a violation of Israel’s obligations under the Fourth Geneva Convention,[18] but is a strategic tool in preserving its colonial apartheid regime over Palestinians.

These IOF operations amount to measures of collective punishment, a violation of Article 33 of the Fourth Geneva Convention.[19] Further prohibited under Article 50 of the Hague Regulations, the act of inflicting collective penalties on a population on account of the actions of individuals is unlawful.[20] Crucially, the demonstrated collective persecution and systematic violation of human rights of the protected Palestinian population, amounts to a crime against humanity and supports the ongoing regime of apartheid against the Palestinian people on both sides of the Green Line.[21]

Former Special Rapporteur on the situation of human rights in the Palestinian Territory, Michael Lynk, has stated that Israel’s use of collective punishment measures, “[…] has been clearly forbidden under international humanitarian law” and that “it is an affront to justice and the rule of law to see that such methods continue to be used in the 21st century and that Palestinians collectively continue to be punished for the actions of a few”.[22]

Collective punishment remains a foundational element of Israel’s apartheid regime, in order to create a climate of fear and intimidation for Palestinians under the guise of security rhetoric. Israel’s recent collective punishment measures remain a blatant attempt to further entrench its settler-colonial and apartheid regime over Palestinians, seeking to repress all resistance to its illegal colonization and annexation of the OPT and deny Palestinians their right to self-determination.

[19] Art. 33, Fourth Geneva Convention. This has been clarified to prohibit inflicting “penalties on persons who have themselves not committed the acts complained of.” International Committee of the Red Cross (ICRC), Protocol Additional to the Geneva Conventions of 12 August 1949, and relating to the Protection of Victims of Non-International Armed Conflicts (Protocol II), 8 June 1977, 1125 UNTS 609.

[22] United Nation Office of the High Commissioner, ‘Israel’s collective punishment of Palestinians illegal and an affront to justice: UN expert’ (17 July 2020), available at.