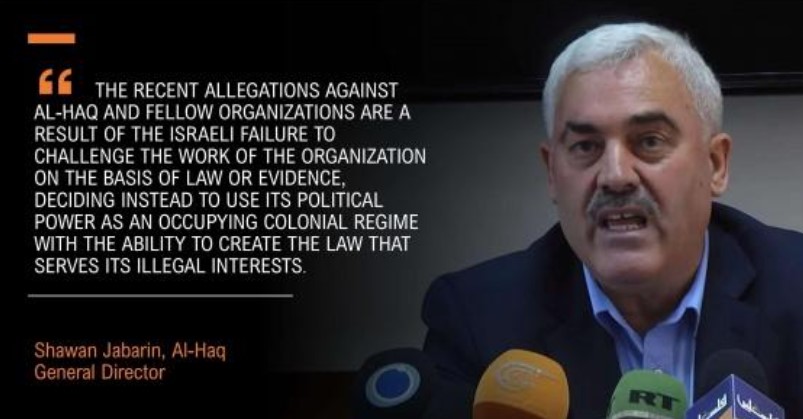 Statment By Al-Haq independent Palestinian non-governmental human rights organisation): Al-Haq strongly rejects the designation made by the Israeli Ministry of Defense, on 19 October 2021, of Al-Haq and five fellow Palestinian civil society organisations as “terror organisations,” under Israel’s domestic Anti-Terrorism Law, 2016 and calls for international solidarity and concrete measures to ensure its immediate rescission.

The baseless allegations represent an alarming and unjust escalation of attacks against the Palestinian people in their struggle for freedom, justice and  the right to self-determination. Israel’s widespread and systematic smearing of Palestinian human rights NGOs and human rights defenders aims to delegitimize, oppress, silence and drain their work and resources.

Further, the unlawful application of Israel’s domestic law to the occupied Palestinian territory (OPT) serves to entrench the maintenance of its settler-colonial and apartheid regime of institutionalised racial discrimination and domination over the Palestinian people as a whole.

For decades, Al-Haq has struggled to end Israel’s illegal settler-colonial policies and practices which, since 1948, have denied the Palestinian people from exercising their inalienable right to self-determination. Al-Haq is one of the leading Palestinian organizations calling for accountability and an end to Israel’s impunity for war crimes and crimes against humanity.

It is no coincidence that Israel’s recent escalation of punitive measures against Al-Haq and fellow civil society organisations, has come in the immediate aftermath of the opening of an International Criminal Court investigation into Israel’s crimes in the Situation in Palestine. To that end, Al-Haq will tirelessly maintain its efforts to ensure that Israeli perpetrators of mass atrocity crimes are held accountable.

The history of human rights advocacy and defense, from Africa to Latin America and other corners of the globe, have shown that the means and methods of the oppressor have no limits. In striving towards the liberation of Palestine from Israel’s apartheid and settler colonial regime, our work as human rights defenders will not be deterred or silenced.  We are confident in the solidarity of our friends and partners around the world in confronting these obstacles placed before us.

The Palestinian struggle is a universal struggle against oppression and the denial of self-determination in the pursuit of justice and the ability to live in dignity.  We remain steadfast in advocating for a dignified future for the Palestinian people and the liberation of Palestine from the shackles of Israel’s unlawful colonial rule.