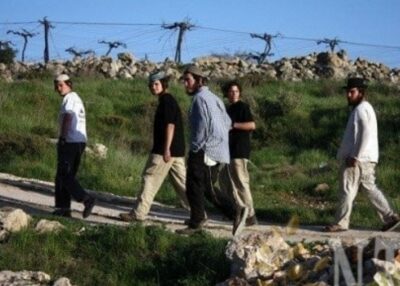 Hijazi added that the colonizers came from the illegal Efrat colony, which was built on stolen Palestinian lands, and were walking around large areas of the lands.

The colonizers also installed six mobile homes on the Palestinian lands, as a prelude for illegally annexing them.

It is worth mentioning that, last Wednesday, the colonizers and the soldiers uprooted 10 Palestinian Dunams that were planted with olive saplings in the same area, in addition to demolishing retaining walls and the foundations of an under-construction home.

The area witnesses frequent Israeli violations, as the colonizers frequently invade the lands, bulldoze them, and install outposts to occupy the lands and prevent the Palestinians from reaching them.