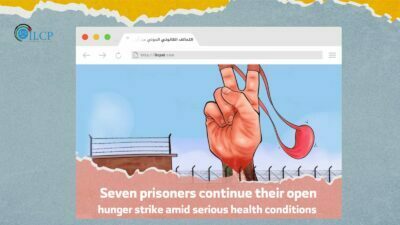 The Palestinian Commission of Detainees And Ex-Detainees Affairs has reported, Saturday, that seven detainees, including one who started the strike 101 days ago, held by Israel under the illegal arbitrary Administrative Detention orders, are ongoing with the hunger strike.

The Commission stated that one of the detainees, Kayed al-Fasfous, is ongoing with the hunger strike he started 101 days ago, despite his seriously deteriorating health condition.

It added that al-Fasfous, who could die at any given moment, remains determined to continue the strike demanding his freedom.

In addition, Miqdad al-Qawasma, started the hunger strike 94 days ago, Ala’ al-A’raj, started 77 days ago, Hisham Abu Hawwash, 68 days ago, Shadi Abu Aker, 60 days ago, Ayyad al-Hreimi, 31 days ago, and Rafat Abu Rabea’ who began the strike a week ago.

The Media Advisor of the Commission, Hasan Abed-Abbo, warned that both al-Fasfous and al-Miqdad, who began their hunger strikes more than three months ago, could face irreversible health conditions, and even death.

Abed-Rabbo added that the Israeli courts are avoiding making any ruling regarding the hunger-striking detainees, and described the move as an “attempt to slowly kill the detainees.”

In a previous statement, the Commission said that the Israeli Physicians at the Kaplan Israeli Medical Center have attempted to force-feed Miqdad al-Qawasma, to end his strike without ending his arbitrary detention.

It is worth mentioning that the dozens of detainees, members of the Islamic Jihad Movement, who started a series of solidarity measures, including a hunger strike they began nine days ago, have ended their protests after the Israeli Prison Authority agreed to their demands.

The main demands were ending all punitive measures against them, including removing dozens from solitary confinement, voiding all fines and fees imposed on them, and improving the living conditions, especially for the female detainees.