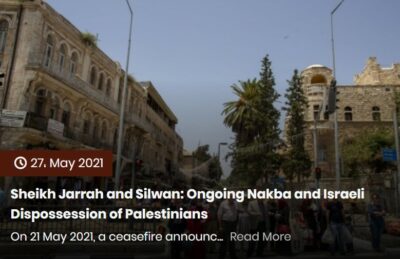 May 27, 2021 – (Al-Haq) On 21 May 2021, a ceasefire announced the ending of Israel’s 11-day military offensive on the Gaza Strip, which resulted in the killing of at least 248 Palestinians, including 66 children, the demolition of thousands of Palestinian houses, and the displacement of some 72,000 Palestinians. However, the ceasefire did not end Israel’s institutionalized regime of racial oppression, domination and dispossession, embedded in its settler-colonial and apartheid regime over the Palestinian people as a whole.

The Israeli dispossession of Palestinians takes various forms, implemented through discriminatory laws and policies, all at the expense of Palestinians. Palestinian families from the Sheikh Jarrah and Batn Al-Hawa neighbourhoods in East Jerusalem, for example, are still under the imminent threat of being forcibly transferred, after settler organisations filed cases against them in the Israeli courts.

Occupying and illegally annexing East Jerusalem in 1967, Israel unlawfully extended the application of its own domestic legislation to the territory it occupies, further displacing Palestinians and appropriating their property. To cement Palestinian dispossession and displacement in East Jerusalem, Israel enacted the Legal and Administrative Matters Law in 1970, which exclusively allows Jews to pursue claims to land and property allegedly owned by Jews in East Jerusalem before the establishment of the State of Israel in 1948.

The Israeli Supreme Court was supposed to hold a hearing on 10 May 2021 on the forced eviction of eight Palestinian families living in Sheikh Jarrah, but it was postponed. Waiting for the Court’s decision, residents of Sheikh Jarrah have been leading a campaign, raising awareness about the situation, and calling for solidarity activities in support of their struggle and in resistance to Israel’s oppression. These efforts have been met with further oppression, as the Israeli Occupying Forces (IOF) and Israeli settlers, some of the latter being armed, have been suppressing and attacking Palestinians in Sheikh Jarrah, including by raiding and damaging houses, firing tear gas canisters, sound bombs and skunk water, and arbitrarily arresting them.

In a similar context, today, 26 May 2021, the Jerusalem District Court held a hearing on the forced eviction of some 108 Palestinians of 18 households from their homes in Batn Al-Hawa neighbourhood in Silwan, occupied East Jerusalem. The Court postponed its ruling.

Premising their claim on a property deed from the Ottoman rule period, the Benvenisti Trust, a Jewish Trust, claimsownership of 5.2 dunums of Batn Al-Hawa land. In 2002, the Custodian General transferred the land to the Benvenisti Trust, whose management is in the hands of the settler organisation Ateret Cohanim. The decision was sanctioned by the Jerusalem District Court, and the transfer was done without informing the Palestinian residents who have lived on the land since the 1950s, and who have contracts proving so.

Since then, Ateret Cohanim has filed ‘eviction orders’ against the Palestinian families. In 2017, the Palestinian residents filed a petition with the Israeli High Court to contest the evictions, arguing that, and according to the Ottoman law applied at the time, the ownership applies only to the buildings, which do not exist anymore, but not the land itself. In June 2018 the Israeli government acknowledged that the Israeli Custodian General’s transfer of the land to the Benvenisti Trust was done without investigating the nature of the Trust, the Ottoman laws, or the existing buildings. Yet, the Israeli High Court rejected the appeals of the families, paving the way for the settler group Ateret Cohanim to continue legal proceedings to evict 81 Palestinian families, numbering approximately 436 Palestinians.

Most of the families living in Sheikh Jarrah and Batn Al-Hawa neighbourhoods, who are facing the threat of forced eviction, are refugees, who have been denied their right of return and to reclaim their original land and properties. What is happening in Sheikh Jarrah and Batn Al-Hawa exemplifies the overarching and the overall context of Palestine of Israel’s maintenance and expansion of its settler-colonial and apartheid regime.

Al-Haq reminds that the legal framework applicable in occupied East Jerusalem is international humanitarian and international human rights law. Israel is specifically prohibited from annexing the occupied territory under Article 47 of the Fourth Geneva Convention. As such, Israel’s application of its domestic law, including the Legal and Administrative Matters Law in 1970, and provisions of Israel Tenancy law are not only wrongful acts in violation of international law, of which there can be no recognition, but acts which third States must collectively work to bring to an end. There are clear obligations under Article 43 of the Hague Regulations, to continue the status quo ante bellumincluding the preservation of private tenancy rights, which are further protected as private property of the civilian population under Article 46 of the Hague Regulations. In particular, such acts amount to forcible transfer, grave breaches of the Geneva Conventions, and war crimes and crimes against humanity within the jurisdiction of the International Criminal Court.

Al-Haq reaffirms the urgent need for the international community to address the root causes of prolonged denial of Palestinian rights, and long-practiced Israeli violations, and stresses on the need for the Office of the Prosecutor to publicly condemn the imminent forced evictions of Palestinians in Sheikh Jarrah and Batn Al-Hawa neighbourhoods, urgently investigate this case within the Situation of Palestine and intervene to forestall the displacement of these Palestinian families from their homes.