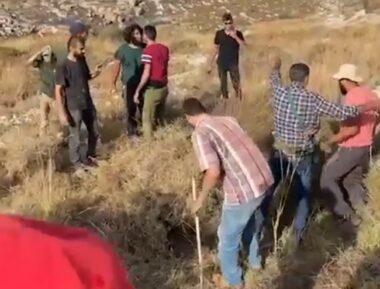 Medical sources have confirmed, Friday, that ten Palestinians were injured in Ni’lin village, west of the central West Bank city of Ramallah, after Israeli soldiers and illegal colonialist settlers invaded their lands.

The sources said ten Palestinians were injured, including one who suffered a head injury, and received the needed treatment.

The incidents took place when several Israeli colonists invaded the Jabal Al-‘Alam area and started throwing stones at the Palestinians, in addition to attacking them with batons.

Israeli soldiers invaded the area and forced the Palestinians out of their lands instead of removing the colonists, after ordering the residents to move away dozens of meters to “avoid close contact with the colonists.”

The Palestinians were on their lands, removing dried weeds, and cleaning the lands to plant them later.