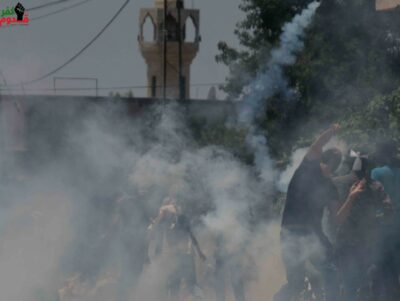 Israeli soldiers injured, Friday, many Palestinians during the weekly procession in Kufur Qaddoum, east of the northern West Bank city of Qalqilia.

They chanted against the occupation and its colonialist activities and calling for steadfast and popular resistance until the liberation of Palestine.

Kufur Qaddoum witnesses frequent Israeli invasions, assaults, and abductions as it continues to hold its weekly nonviolent processions against the illegal Annexation Wall and colonies, and against the closure of the main road, which was blockaded by the military sixteen years ago, to enable easy access for colonialist settlers driving to and from the Kedumim colony, built on private Palestinian lands.

The Wall and Settlement Resistance Commission