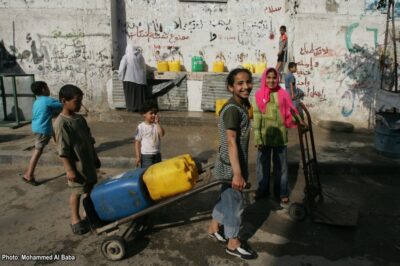 Al-Mezan Center For Human Rights: Water is the essence of all forms of life, including that of humans. As such, water is a recognized human right by itself, as well as a prior condition to implement other basic rights, including the right to an adequate standard of living and the right to health. In 1993, the United Nations (UN) instituted an awareness day to focus the attention on water-related issues and to advocate for sustainable and rights-based water policies. Ever since March 22 is globally known as World Water Day.

To mark this year’s World Water Day, the UN called on communities around the world to debate and discuss the values of water and address the following question: what does water mean to you? As is to be expected, water means different things to different people in different settings. For the Palestinian people in the occupied Palestinian territory (oPt), water is not only an essential element for leading a life in human dignity but also a tool of control, domination, and oppression by Israel, the Occupying Power.

Since the start of the occupation in 1967, Israel and its parastatal institutions have purposely prevented Palestinians from controlling their water sources throughout the whole oPt, thereby flagrantly violating their inalienable right to self-determination, including permanent sovereignty over natural resources. The extent of control exercised by Israeli authorities over the water sector has impeded Palestinian access to their water sources, such as the Jordan River, to maintain and develop existing water facilities or to build any new infrastructure without having been granted an Israeli-issued permit.

This system of racialized and institutionalized material discrimination implemented by Israel and its parastatals in the water sector has led many rights groups to describe it as “water apartheid”, possibly amounting to a crime against humanity under the Rome Statute of the International Criminal Court.[1]

The Gaza Strip, part of the oPt, has been affected for years by a severe and purely human-made water crisis that continues unabated. In parallel to the Israeli occupation and apartheid system, the crisis is further compounded by Israel’s 13-year illegal closure and systematic military attacks on civilian populations and infrastructure in Gaza. The closure—which is considered an unlawful collective punishment of two million Palestinians under international law—and full-scale military bombardments have pushed all basic services in the Gaza Strip to the brink of collapse, including water and sanitation facilities.

Several years ago, the UN Country Team in the oPt warned that by 2020 “with the supply of water too low to meet the demand, the living and health conditions of the people of Gaza can only further deteriorate, exposing the population to water-borne illnesses, and other threats.”[2] In the same report, it was said that the Gaza Strip in 2020 would no longer be “a livable place” unless action was taken. And yet, in 2021, 95 percent of Gaza’s two million population still do not have access to clean water, as 97 percent of water in Gaza is unfit for human consumption based on the standards of the World Health Organization.[3] In light of these figures, what does water mean for Gaza’s population?

For many Palestinians in Gaza, safe and clean water means expensive and unaffordable water. Indeed, as a result of the poor financial situation and high levels of poverty in Gaza, most of its population cannot afford to buy drinkable water and must rely solely on tap water (when available). For just as many, the lack of water means being unable to implement even basic safety and preventive measures for COVID-19, such as hand-hygiene. For the Palestinian agricultural community in the “buffer zone”, the no-go military area unilaterally enforced by Israel within the territory of the Gaza Strip, water means work, cultivation, growth, but also devastation.

For several years now, Al Mezan has been reporting episodes of flooding incidents carried out by Israeli authorities, undermining the activities of Palestinians farming in the buffer zone. Israel has in fact built several dams within its territory to control and redirect the natural flow of water away from the Gaza Strip. When these dams reach their full capacity, the Israeli authorities open their gates and deliberately flood Palestinian farmland in the buffer zone, devastating harvests and causing huge damages to houses and other properties.

With the understanding that having access to safe, clean and drinking water is central to living a life in dignity and to ensuring respect for a wide set of human rights, Al Mezan seizes the occasion to call on third States and the international community to uphold their moral and legal obligations towards the occupied Palestinian people, also by guaranteeing the respect for the human right to water—which requires an equal, inclusive and non-discriminatory access to safe and clean water— and by ensuring accountability and justice for all violations of international law in the oPt, including those that are water-related.

Procedures on the escalating water and sanitation crisis in the Gaza Strip, occupied Palestinian territory” 9 November 2020. Available at:  http://mezan.org/en/uploads/files/1605008575924.pdf

[2] UN Country Team in the occupied Palestinian territory, Gaza in 2020: A liveable place?, August 2012, at: https://unsco.unmissions.org/sites/default/files/gaza_in_2020_a_liveable_place_english.pdf.