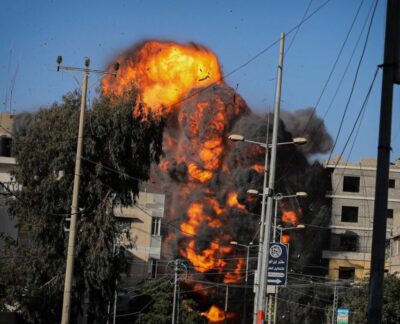 He added that dozens of Palestinians have been mutilated by the Israeli missiles and shells, and stated that at dawn, Saturday, the army obliterated 10 members of Abu Hatab and al-Hadeedi families, killing ten, including a mother and four children.

“The world is witnessing this war of annihilation of our people, killing entire families, and wounding dozens,” Dr. al-Qedra stated, “The Israeli missiles and shells have wiped out 10 families of 38 Palestinians, including 21 children and 11 women, in addition to wounding dozens.”

He also said that the ongoing closure of Gaza’s terminals has led to shutting down power stations, in addition to the serious damage to electricity grids due to Israel’s bombardment, which directly impacts the hospitals and medical centers, especially operation wards, incubators, and other vital medical equipment.

The moments when the Cairo tower is hit by several missiles which target selected apartments https://t.co/vCcG6DKxDB pic.twitter.com/pY3v1rwDna Dr. al-Qedra called on the international community to ensure the end of Israel’s aggression, and the reopening of all border terminals, to allow the entry of medical supplies and the transfer of wounded Palestinians to hospitals outside of the Gaza Strip.
“The direct, and indirect, targeting of medical centers and facilities, including Beit Hanoun hospital, is a grave threat to the lives of the people, in addition to Israel’s constant targeting of ambulances and medical teams,” he stated, “Israel continues to violate International Law and all related human rights treaties and legal agreements, which requires a serious and practical intervention from the international community.”

He also stated that the displaced families, currently in emergency centers that were set up to temporarily shelter them after the army destroyed their homes, are facing serious shortages of basic supplies, amidst the rising fear of more coronavirus infections, which raises further fears of a third wave of infections and deaths.

The moments when the area of Fayrouz towers adjacent to Shati camp West Gaza City are targeted by airstrikes.

Shortly after midnight the Abu Hatab family home is hit by a powerful blast and only a smal child survives with 10 family members killed and the cause is disputed pic.twitter.com/Iy2lrxuUcq

Dr. al-Qedra called on international human rights and health groups, to provide the urgently needed medical aid, including machines, medicine, and other essential supplies, as the coronavirus and the Israeli onslaught are continuing to claim more lives.

The citizens and the civil defense work to pull bodies from the underground infrastructure, which stretches under vast parts of eastern Gaza governorate pic.twitter.com/Lr4U1Nx0H9