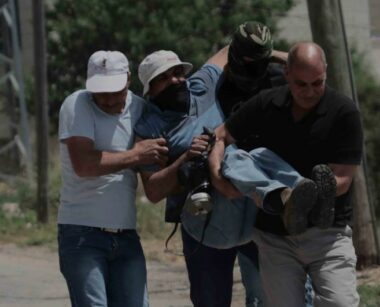 Updated: The Health Ministry has confirmed that the Israeli army shot and injured 450 Palestinians in several parts of the West Bank, Saturday.

All the other injured Palestinians were shot with rubber-coated steel bullets or suffered the severe effects of tear gas inhalation, including some who were directly shot with high-velocity gas bombs, and concussion grenades.

Israeli soldiers injured, Saturday, at least 29 Palestinians, Saturday, including seventeen who were shot with live fire, in several parts of the occupied West Bank.

The Palestinian Red Crescent Society (PRCS) has reported that its medics dealt with 29 injuries, including 17 who were shot with live fire, 8 with rubber-coated steel bullets, three due to the severe effects of tear gas inhalation, and one who fell while the soldiers were chasing him.

The injuries took place when the soldiers invaded various areas of the occupied West Bank, especially in Hebron, Bethlehem, Ramallah, Nablus, and Qalqilia, and attacked protesters marching in solidarity with Gaza amidst the ongoing Israeli onslaught on the coastal region.

Protests also took place when groups of illegal fanatic colonialist settlers attacked farms in Qusra village, south of Nablus, before the soldiers invaded it and started firing live rounds and rubber-coated steel bullets at the Palestinians.

The colonists also invaded Sielet ath-Thaher near Jenin, and attacked homes, before the locals intercepted them. The army invaded the area and opened fire at the Palestinians.

In Qalqilia, in northern West Bank, the soldiers shot a child, 13 years of age, during the weekly nonviolent procession in Kufur Qaddoum, after shooting him with a live round in the back and caused dozens to suffer the effects of teargas inhalation.