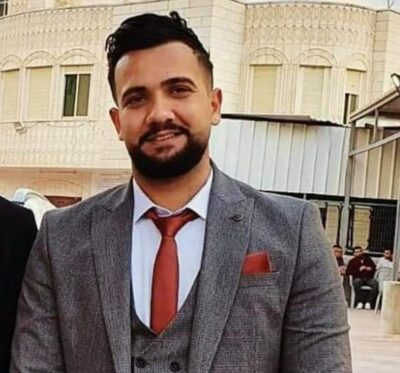 The Palestinian Red Crescent Society (PRCS) has confirmed that Israeli soldiers killed, on Saturday evening, a young Palestinian man, after opening fire at his car and leaving him to bleed to death, near the junction of the al-Fawwar refugee camp, south of the southern West Bank city of Hebron.

|Update: The soldiers shot nine Palestinians with live fire in Hebron city, including one who suffered a serious gunshot wound to the chest.  Another Palestinian suffered a moderate wound after the army shot him near Yatta town, south of Hebron.|

The sources have officially confirmed that the Palestinian has been identified as Hussein Atiya at-Teety, 26, from the al-Fawwar refugee camp.

Eyewitnesses said the soldiers prevented a Palestinian ambulance from reaching the seriously wounded young man and refused to allow the medics from approaching him, while he continued to bleed.

The soldiers also fired live rounds at the ambulance, while Hussein continued to bleed, and only allowed the medics to reach him when he died from his wounds.

The Palestinian was shot by soldiers in a fortified concrete military tower, who fired many live rounds at the car without any cause of reason.

In related news, illegal Israeli colonists attacked many homes, and burnt lands in the ar-Reehiyya village, near Hebron, before the soldiers invaded the area, and started firing live rounds, gas bombs, and concussion grenades at the Palestinians and many homes.

The colonists also attacked homes in Tal Romedia, in the center of Hebron city, causing excessive property damage and at least one injury.

On Friday, a Palestinian identified as Ismael Jamal Tubasi, 23, was killed in a similar attack by the Israeli colonists on the village. On the same day, Israeli soldiers killed eleven Palestinians in the West Bank.