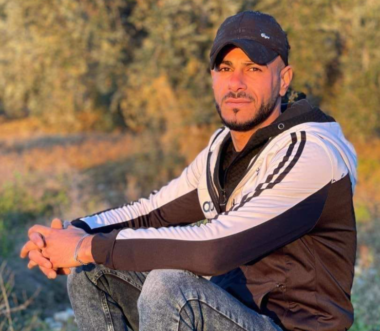 Israeli soldiers killed, late on Saturday at night, a young Palestinian man, and injured nine others, one seriously, near Tulkarem, in northern West Bank.

Medical sources have confirmed that the slain Palestinian has been identified a Yasin Hasan Yassin Hamad, 26, from Saida town, north of Tulkarem.

They added that the soldiers shot the Palestinian with a live round in the heart, instantly killing him, near the Annexation Wall, west of Zeita town, north of Tulkarem.

One of the wounded Palestinians suffered a profoundly serious injury after the soldiers shot him with a live round in the chest, while many others suffered the effects of tear gas inhalation.

The Israeli attack took place when the soldiers invaded Zeita, leading to protests, and attacked the Palestinians with live fire, rubber-coated steel bullets, and gas bombs.

In related news, the Palestinian Red Crescent Society (PRCS) has confirmed that Israeli soldiers killed, on Saturday evening, a young Palestinian man, identified as Hussein Atiya at-Teety, 26, from the al-Fawwar refugee camp, after opening fire at his car and leaving him to bleed to death, south of the southern West Bank city of Hebron.

On Friday, a Palestinian identified as Ismael Jamal Tubasi, 23, was killed in a similar attack by the Israeli colonists on the village. On the same day, Israeli soldiers killed eleven Palestinians in the West Bank.