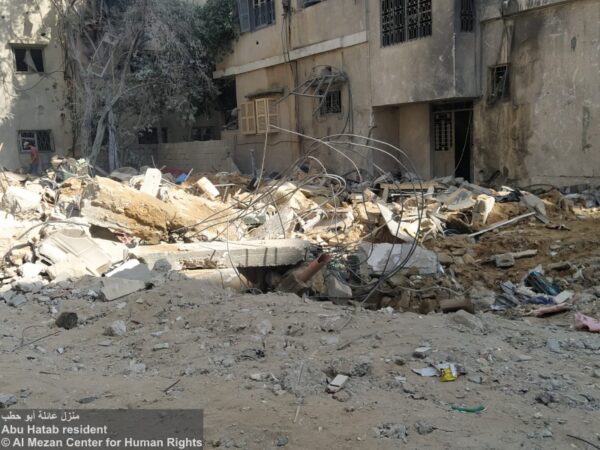 On the sixth day of Israel’s military offensive against the Gaza Strip, Israel escalated its attacks on civilians and civilian infrastructure in different densely populated areas of the Gaza Strip.

[1] Marked by unwarranted shelling of civilian homes without prior warning at night, Israel’s military offensive indicates a conscious decision to inflict the greatest number of casualties amongst civilians. In the latest such incident, Israel’s air force targeted a house in Al-Shati refugee camp, western Gaza, without prior warning while two families were still inside at 1:30am on 15 May. The airstrike destroyed the house completely and killed seven children and two women.

Al Mezan’s field monitoring shows that Israel’s offensive has so far resulted in the death of 114 Palestinians, including 41 children and 22 women; 725 others have been injured in the attacks, including 145 children and 116 women. The number of targeted residential buildings rose to 51, which—along with the three destroyed towers previously reported—brought the total number of destroyed residential units to 219. However, Al Mezan’s fieldworkers estimate that this figure is likely to rise because some of the buildings were completely destroyed and evacuated.

In addition, seven schools, four mosques, and hundreds of private properties and governmental sites have been significantly damaged since the escalation began. Airstrikes also led to the large-scale destruction of power and water networks, as well as thousands of square meters of paved roads.

These attacks exacerbate the already deteriorating humanitarian situation in the Gaza Strip caused by Israel’s comprehensive closure, which now also extends to a ban on the entry of fuel, food, and medical supplies. Similarly, a worsening environmental crisis is expected to emerge as Palestinian municipalities struggle to provide basic water and sanitation services after Israel’s airstrikes caused considerable damage to vital infrastructure, including municipal facilities and vehicles.

Al Mezan’s field monitoring and documentation work recorded the attacks in the past 24 hours as follows:

Israel’s intense shelling of agricultural and vacant lands adjacent to residential areas continued. Most notably, an Israeli airstrike targeted the seaport to the west of the city, while another completely destroyed two poultry farms. The attacks caused severe panic among families in the area, notably children and women.

On 14 May 2021, at approximately 8:10pm, Israel’s air force targeted a group of people in Abasan Al-Kabira, eastern Khan Younis, with one missile, killing Walid Zuhair Abu Shab, 23, and moderately injuring another.

On the same day, at approximately 6:50pm, an Israeli airstrike completely destroyed Ziyad Abdelaziz Abu Shaqra’s two-story house and damaged nearby houses. Seven people sustained shrapnel wounds and were transferred to Nasser Hospital for treatment. According to field reports, Israeli forces had informed the residents of Abu Shaqra’s house of their intention to target the house 30 minutes before the attack through a phone call.

In the Middle Gaza district:

On 14 May 2021, at 1:40pm, Israel’s air force fired four missiles at a two-story house belonging to Ayman Nofal in al-Bureij refugee camp, completely destroying it and severely damaging nearby houses and properties. One passerby, Mahmoud Mohammed Al-Khaldi, 28, was killed, while 15 neighbors, including two children and four women, sustained injuries.

On 14 May 2021, at approximately 8:00pm, Israel’s air force fired two missiles at an apartment in the six-story Al-Rabea Tower in southern Gaza City, killing Abdullah Ashraf Jouda, 12, and Adam Mohammed Al-Farawi, 18. The tower contains 27 apartments in total, three of which were completely destroyed in the airstrike, while the rest of the apartments as well as nearby buildings were considerably damaged.

Without prior warning, Israel’s air force fired three missiles at Alaa Mohammed Abu Hatab’s three-story house in Al-Shati refugee camp, western Gaza City, at 1:30am today. The airstrike resulted in the complete destruction of the house and the death of nine people. The fatalities were reported as follows: Abu Hatab’s 30-year-old wife, Yasmin, and their children, Yousuf, 10, Bilal, 9, Mariyam, 7, Yamen, 5, Abu Hatab’s sister, Maha Abu Hatab (Al-Hadidi), 34, and her children, Suhaib Al-Hadidi, 12, Abdelrahman Al-Hadid, 7, and Usama, 5. Some other residents have not been located yet, and rescue crews from the Palestinian Civil Defense are currently trying to recover their bodies.

On 14 May 2021, at 4:30pm, Mahmoud Mohammed Al-Madhoun, 30, was pronounced dead from his wounds at Al-Shifa Hospital. Al-Madhoun sustained a shrapnel injury to his head as he stood at the entrance of his house when an Israeli airstrike hit adjacent land.

Similarly, six-year-old Buthaina Mahmoud Ubaid was pronounced dead from her head wounds at Gaza’s Indonesia Hospital. The wounds were caused by shrapnel from a missile as she stood in front of her house in Jabalia.

On the same day, at 8:20pm, Ahmed Mohammed Al-Nader, 32, and Ahmed Awad Al-Nader, 36, were pronounced dead on arrival at Gaza’s Indonesia Hospital, having been recovered by rescue crews by the Palestinian Civil Defense. Both men had been killed in an Israeli airstrike on agricultural land earlier that day.

Later that evening, at around 11:50pm, Israel’s air force targeted the Abdelrazeq Glebo Mosque in Beit Lahia with 15 missiles, completely destroying it. The air force also fired another missile at a front yard next to the mosque. As a result, Ahmed Hatem Al-Mansi, 34, his brother, Yousuf Hatem Al-Mansi, 22, and his neighbor, Ahmed Mohammed Sabbah, 28, were killed. Five other people, including a woman, sustained injuries, which in the case of one person, were serious.

While Al Mezan reiterates its strongest condemnation of Israel’s war crimes against Palestinian civilians, it stresses that chronic inaction by the international community facilitates and perpetuates Israel’s continued and escalated violence in Gaza. To date, the civilian population, notably children, have not recovered from the devastating ramifications of previous military escalations, including Operation Protective Edge in 2014. Yet, they continue to be Israel’s regular target.

Accordingly, Al Mezan calls on the international community, especially the High Contracting Parties to the Fourth Geneva Convention, to take firm and swift action to protect Palestinians and ensure the respect of international law by Israel.

[1] Please note that the information mentioned in this report covers the last 24 hours. Previously, Al Mezan indicated the days of the attacks based on its field documentation but changed it to avoid confusion as attacks on the Gaza Strip began on the evening of Monday, 10 May 2021.