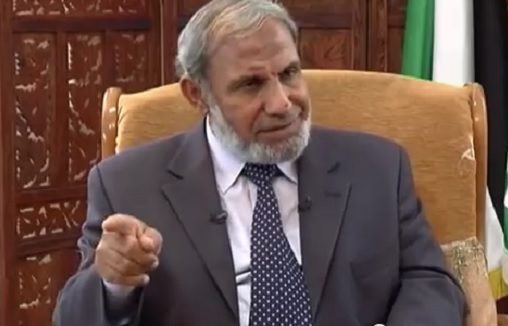 In a new statement to media outlets, influential Hamas leader in Gaza, Mahmoud Al-Zahar, warned that the continuation of the Israeli siege and the ‘calm, in return for calm’ on both sides of the borders, can not last forever.

Al-Zahar’s remarks, which were reported by local Palestinian media outlets, including Al-Quds News, noted that the Israeli blockade, which has remained in place for the past 13 years, must come to an end and that the 2018 Great March of Return on the borders between Gaza and Israel, was launched and continued until recently, in order to lift the siege.

He maintained that the Palestinian resistance movement, involving his own Islamist Hamas, which has ruled Gaza since 2007, can not accept the continuation of the current situation.

“Only an insane person could accept the current situation of, ‘calm, in return for calm’. The Palestinian resistance has made up its mind already by declaring its determination to force the Israeli occupation to lift the Gaza siege”.

In a strongly-worded message, the Hamas official warned the Israeli occupation against taking for granted US President, Donald Trump’s unwavering support for the occupation state, or some Arab countries’ normalization with Israel.

In March 2018, the ruling Islamist Hamas party in Gaza, along with various political and resistance factions, engaged in mass peaceful demonstrations for the purpose of lifting the current 13-year-long Israeli blockade of the coastal territory.

Over the past couple of years, the region has seen frequent Israeli military attacks and Palestinian rocket fire from Gaza, into nearby Israeli areas. Israeli army killed hundreds of peaceful Palestinian protestors and wounded many thousands during the great march of Return protests, in a clear display of the use of excessive force.

Just recently, the Israeli army bombed Hamas-linked sites in Gaza, claiming it was in response to a rocket that landed in a nearby open field.

Israeli officials have recently revealed the possibility of carrying out a large-scale military assault, with the aim of undermining Palestinian resistance groups, including the ruling Hamas.