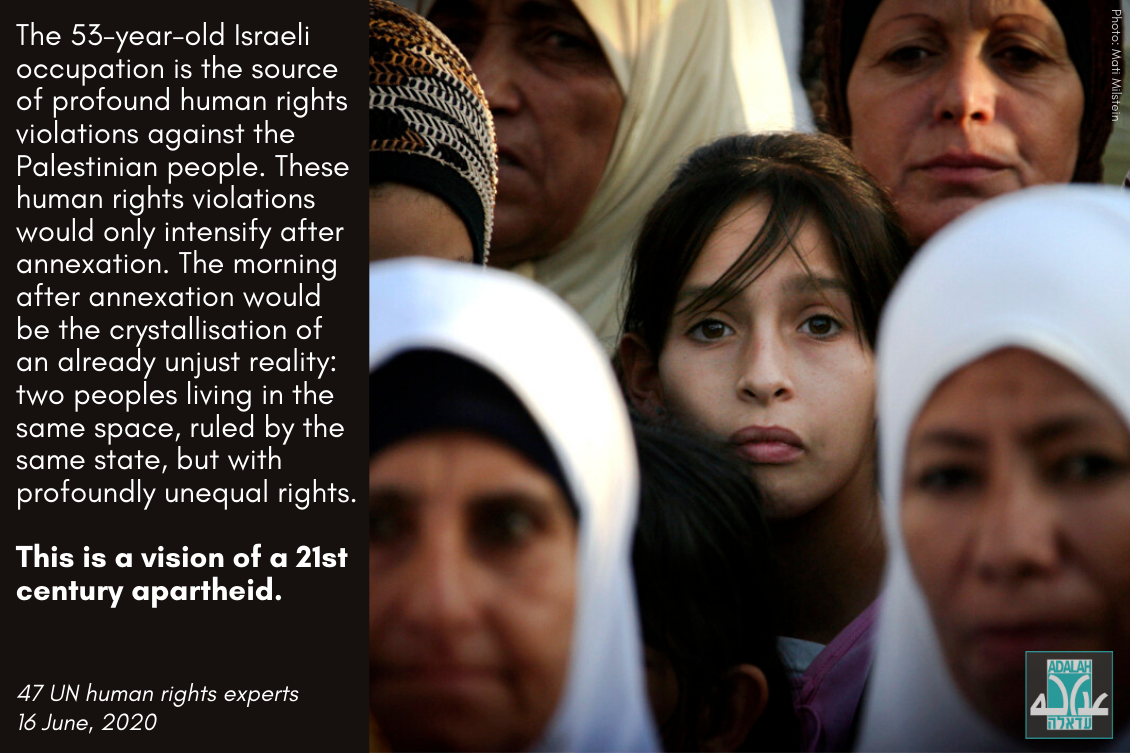 17/06/2020: ADALAH – The Legal Center for Arab Minority Rights In Israel: UN experts: Annexation would be a crystallization of already unjust reality: two peoples living in same space, ruled by the same state, but with profoundly unequal rights; Adalah and partners: UN and the international community must oppose annexation, guarantee the right of Palestinians to self-determination.

Adalah – The Legal Center for Arab Minority Rights in Israel presented an oral intervention yesterday, 16 June 2020, at the United Nations Human Rights Council in Geneva, co-sponsored by four partner Palestinian human rights organizations, calling on the UN and the international community to vehemently oppose Israel’s looming annexation of large swaths of the occupied Palestinian West Bank and to push for the dismantling of all Israeli settlements.

Adalah and partner groups warn that annexation will normalize Israel’s colonial project and amounts to apartheid via the continued expansion and construction of illegal settlements, displacement and dispossession of Palestinians, and demographic manipulation. The Israeli plan would further entrench racial, ethnic, and religious segregation as a legal norm, and Israel will formally establish itself as the sole sovereign regime over the Palestinian people in historic Palestine.

The full text of the oral intervention, presented in the context of Item 9 – Racism, racial discrimination, xenophobia and related forms of intolerance, follow-up, and implementation of the Durban Declaration and Programme of Action, is as follows:

Last month, in the midst of the coronavirus pandemic, Israel swore in a new government seemingly committed to formally annexing parts of the occupied Palestinian territory (OPT) in the West Bank in July, in a blatant violation of international law. This annexation, part of the so-called Trump-Netanyahu “Deal of the Century” and the Netanyahu-Gantz coalition agreement, normalizes Israel’s colonial project and amounts to apartheid via the continued expansion and construction of illegal settlements, displacement and dispossession of Palestinians, and demographic manipulation.

The principles of this plan are enshrined in Israel’s Jewish Nation-State Basic Law enacted in July 2018. This law established a constitutional order based on systematic ethnic supremacy, domination, and segregation in the so-called “Land of Israel” and the denial of the realization of national self-determination for the Palestinian people. Article 7 of this law provides that Jewish settlement is a national value to be encouraged and strengthened, giving the state authorities further constitutional legal tools to justify the illegal settlement enterprise in the occupied Palestinian and Syrian territories. This law intends to justify as constitutional segregation in land and housing that targets all Palestinians in historic Palestine, including Palestinians citizens of Israel, who have suffered decades of systematic oppression.

Annexation would further entrench racial, ethnic, and religious segregation as a legal norm. In this context, Israel will formally establish itself as the sole sovereign regime over the Palestinian people in historic Palestine.

We call on the UN and the international community to call for the dismantling of all settlements, to vehemently oppose any annexation, and to guarantee the right of the Palestinian people to self-determination, including the right of return to their homes and property.

Adalah backs the statement issued later in the day by 47 UN special rapporteurs – who are leading independent human rights experts – warning that Israel’s West Bank annexation would break international law and would entrench what they called “a vision of a 21st century apartheid”.

The agreement by the new coalition Government of Israel to annex significant parts of the occupied Palestinian West Bank after 1 July would violate a cornerstone principle of international law and must be meaningfully opposed by the international community, UN experts said today. Forty-seven of the independent Special Procedures mandates appointed by the Human Rights Council issued the following statement:

“The annexation of occupied territory is a serious violation of the Charter of the United Nations and the Geneva Conventions, and contrary to the fundamental rule affirmed many times by the United Nations Security Council and General Assembly that the acquisition of territory by war or force is inadmissible. The international community has prohibited annexation precisely because it incites wars, economic devastation, political instability, systematic human rights abuses, and widespread human suffering.

Israel’s stated plans for annexation would extend sovereignty over most of the Jordan Valley and all of the more than 235 illegal Israeli settlements in the West Bank. This would amount to approximately 30 percent of the West Bank. The annexation of this territory was endorsed by the American Peace to Prosperity Plan, released in late January 2020.

The United Nations has stated on many occasions that the 53-year-old Israeli occupation is the source of profound human rights violations against the Palestinian people. These violations include land confiscation, settler violence, discriminatory planning laws, the confiscation of natural resources, home demolitions, forcible population transfer, excessive use of force and torture, labor exploitation, extensive infringements of privacy rights, restrictions on the media and freedom of expression, the targeting of women activists and journalists, the detention of children, poisoning by exposure to toxic wastes, forced evictions and displacement, economic deprivation and extreme poverty, arbitrary detention, lack of freedom of movement, food insecurity, discriminatory law enforcement and the imposition of a two-tier system of disparate political, legal, social, cultural and economic rights based on ethnicity and nationality. Palestinian and Israeli human rights defenders, who peacefully bring public attention to these violations, are slandered, criminalized or labeled as terrorists. Above all, the Israeli occupation has meant the denial of the right of Palestinian self-determination.

These human rights violations would only intensify after annexation. What would be left of the West Bank would be a Palestinian Bantustan, islands of disconnected land completely surrounded by Israel and with no territorial connection to the outside world. Israel has recently promised that it will maintain permanent security control between the Mediterranean and the Jordan River. Thus, the morning after annexation would be the crystallization of an already unjust reality: two peoples living in the same space, ruled by the same state, but with profoundly unequal rights. This is a vision of a 21st century apartheid.

Twice before, Israel has annexed occupied land – East Jerusalem in 1980 and the Syrian Golan Heights in 1981. On both occasions, the UN Security Council immediately condemned the annexations as unlawful but took no meaningful countermeasures to oppose Israel’s actions.

Similarly, the Security Council has repeatedly criticized the Israeli settlements as a flagrant violation under international law. Yet, Israel’s defiance of these resolutions and its ongoing entrenchment of the settlements has gone unanswered by the international community.

This time must be different. The international community has solemn legal and political responsibilities to defend a rules-based international order, to oppose violations of human rights and fundamental principles of international law and to give effect to its many resolutions critical of Israel’s conduct of this protracted occupation. In particular, states have a duty not to recognise, aid or assist another state in any form of illegal activity, such as annexation or the creation of civilian settlements in occupied territory. The lessons from the past are clear: Criticism without consequences will neither forestall annexation nor end the occupation.

Accountability and an end to impunity must become an immediate priority for the international community. Available to it is a broad menu of accountability measures that have been widely and successfully applied by the UN Security Council in other international crises over the past 60 years. The accountability measures that are selected must be taken in full conformity with international law, be proportionate, effective, subject to regular review, consistent with human rights, humanitarian and refugee law, and designed to undo the annexations and bring the occupation and the conflict to a just and durable conclusion. Palestinians and Israelis deserve no less.

We express great regret about the role of the United States of America in supporting and encouraging Israel’s unlawful plans for the further annexation of occupied territory. On many occasions over the past 75 years, the United States has played an important role in the advancement of global human rights. On this occasion, it should be ardently opposing the imminent breach of a fundamental principle of international law, rather than actively abetting its violation.”