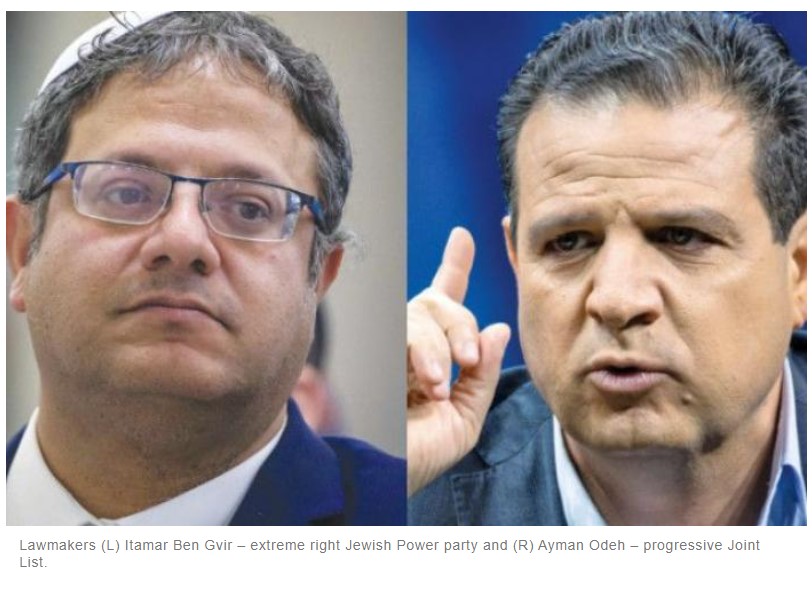 An ultra-nationalist Israeli lawmaker’s behavior on Tuesday is a microcosm of the conduct and attitude of Israel as a whole: bullying, self-absorbed, faux-victimized, evasive. By Kathryn Shihadah

On Tuesday, an Israeli hospital corridor was the scene of a confrontation between two members of the Israeli Knesset – a snapshot of Israel and its relationship with the Palestinians under its power.

The legislators were Itamar Ben Gvir, head of the far right Jewish Power party, and Ayman Odeh, a Palestinian and leader of the progressive Joint List party, an alliance of four Arab-majority political parties in Israel.

Odeh had been spending time with the family of Miqdad al-Qawasmi, age 24, who was on his 91st day of a hunger strike (and was moved to intensive care later that day), when Ben Gvir arrived in what the family called a “provocative” visit.

Ben Gvir and Odeh quarreled; when Ben Gvir tried to walk toward the patient’s hospital room, Odeh shoved him back. Others intervened, and the confrontation ended.

Itamar Ben Gvir’s hospital stunt managed to eclipse the core issue: Miqdad al-Qawasmi is on his deathbed as he protests Israel’s conduct toward him (Ben Gvir’s many other provocative stunts have included this and this and this).

For the last 9 months, al-Qawasmi has been held under administrative detention. This is a practice of imprisoning people without charge or trial, and often citing “secret evidence” that is never revealed to the detainee or his attorney, and may not even exist. Moreover, administrative detention can be extended indefinitely; Palestinians have been detained as long as eleven years.

Al-Qawasmi’s demand is that he be either charged with a crime or set free, and his protest is nonviolent.

Dozens of other Palestinian prisoners are in the midst of hunger strikes at this moment, protesting the use of administrative detention, the deplorable conditions and lack of medical care in Israeli prisons, and restrictions against family visits, to name a few grievances.

In 2017, over 1,000 Palestinian prisoners participated in a mass hunger strike, protesting for basic human rights.

Ben Gvir would have known he’d be unwelcome in the hospital room: he is frequently in the news for provocative activities and speeches,  and is leader of the extremist, racist Israeli party (nicknamed “Israel’s KKK”) that has called for the expulsion of Palestinians from Israel and the occupied territories.

He claimed the purpose of the visit was to “see up close this miracle that a person remains alive despite not eating for several months,” but it was reported that he actually came to complain that the Palestinian patient was being treated in an Israeli hospital.

Within hours after the incident, Itamar Ben Gvir filed a police report accusing Odeh of assault, stating, “he should be put on trial by the police and the attorney general of Israel.”

Israel and its supporters similarly fall back on falsified memory all the time. The greatest example may be references to the “rockets raining down” from Gaza as a provocation for punishing airstrikes and lopsided “wars” – when in reality, Israel’s 14-year blockade of the Gaza Strip and its even longer absolute control have kindled Gazan resistance.

Contrast Ben Gvir’s overreaction to a shove, with the efforts of al-Qawasmi to protest a much greater injustice. 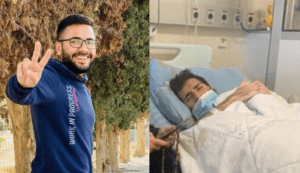 Al-Qawasmi has been wrongly detained for 9 months, and has already spent 4 of his 24 years in Israeli prisons for resisting the occupation that has confined him for his entire life. His protest consists of a nonviolent hunger strike; his demand is simply to know what he is charged with. He may die before Israel grants this basic right.

Many Palestinians are intimately acquainted with outsized penalties for small or nonexistent misdeeds, as well as the feeling of powerlessness against such injustice. For example, it is possible for a Palestinian child who throws a stone at an Israeli tank to find himself behind bars for up to ten years; 15-year-old Ahed Tamimi was imprisoned for 8 months for slapping an Israeli soldier (some Israeli lawmakers called for a life sentence).

On the other hand, Israelis are used to impunity for even the worst crimes. Elor Azaria famously shot an immobilized Palestinian at point-blank range, killing him – for which he spent just 9 months in jail and received a hero’s welcome upon his release. The Israeli government as a whole enjoys impunity as it violates human rights laws on a daily basis, kills Palestinians (go here for a complete list of deaths of both Israelis and Palestinians), and rejects global criticism.

In fact, if al-Qawasmi dies, Israel will technically not be liable: his administrative detention was “frozen” when he entered the hospital, effectively making him the hospital’s responsibility, not the state’s.

Itamar Ben Gvir considers Jewish mass murderers of Palestinians to be heroes, has defended extremists in hate crime cases, has himself been charged – mostly for hate crimes and incitement – more than 50 times; and was convicted of supporting a terrorist organization in 2007. As recently as July, he was forcibly removed from the Knesset during a speech in which he insulted a Palestinian legislator; in May he instigated a spike in violence against Palestinians in Jerusalem.

Ayman Odeh has no criminal record; in 2017, Israeli soldiers shot him in the head with a sponge-tipped bullet as he protested the illegal demolition of a Palestinian Bedouin village.

When Ayman Odeh merely stopped Ben Gvir from entering a hospital room where he was not welcome, Ben Gvir called him a terrorist, then filed charges, and declared that Odeh and his party “act like they own the place” (a particularly ironic statement, considering all of Israel is built on land originally stolen from the Palestinian people).

Ben Gvir is backed by powerful allies, including the Speaker of the Knesset, Micky Levy, who declared that Odeh had “crossed a red line” by “raising his hand” against Ben Gvir.

Conversely, when advocates for Palestinian justice point out actual violence from Israel – as documented by human rights organizations for decades – Israel pundits deny the charges and cry “antisemitism.” That is to say, a shove crosses a red line, but the killing of a sleeping, civilian family, destruction of an entire village, or detention of a young children does not.

The most recent chapter in al-Qawasmi’s odyssey is perhaps the most unjust – and the most typically Israeli.

On Wednesday night, Israeli doctors attempted to force-feed the hunger striker. Force-feeding is considered a violation of the International Covenant for Civil and Political Rights and the Convention Against Torture. It is also a denial of self-determination, is cruel and degrading, tramples on al-Qawasmi’s bodily rights, and ignores his grievance.

That is actually a laundry list of Palestinians’ 73-year-long complaint: since its inception in 1948, Israel has been in breach of multiple international laws and agreements, has prevented Palestinians from exercising self-determination, imposed cruel and degrading control over the entire population, invaded every aspect of their lives, and dismissed their objections or answered them with violence.

In spite of the interminable pressure of a brutal occupation, the vast majority of Palestinians long to live a normal life. They go about their business, resist nonviolently through protests, hunger strikes, marches, and flags. These are ignored by the media and mercilessly repressed by Israel.

Isn’t it time to address the grievances of the nonviolent, instead of siding with the bully?

Kathryn Shihadah is an editor and staff writer for If Americans Knew. She also blogs at Palestine Home.