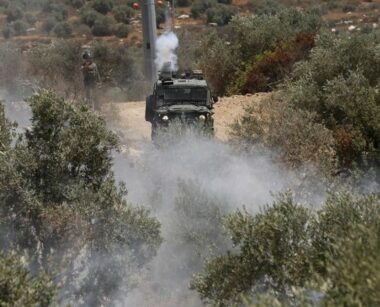 Israeli soldiers injured, Friday, many Palestinians near Jenin and Jerusalem, in the occupied West Bank.

Media sources said the many army jeeps invaded Biddu town, northwest of Jerusalem, and attacked dozens of Palestinians during a nonviolent procession.

The Palestinians held the procession to demand the army to release the corpses of three young men, who were killed by Israeli military fired on September 26th, 2021, in Beit Anan, near Jerusalem.

In Jenin, in northern West Bank, the soldiers invaded Ya’bad town, leading to protests, before firing gas bombs and concussion grenades, causing many Palestinians to suffer the effects of tear gas inhalation.

The soldiers also shot a young man close to the annexation wall near the al-Jalama town, northeast of Jenin.