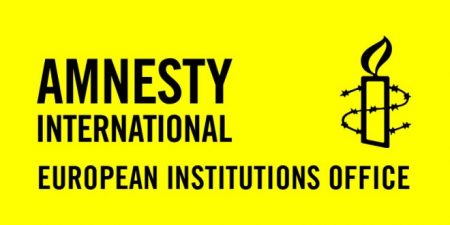 Israel’s decades-long policy of detaining Palestinians from the occupied West Bank and Gaza, in prisons inside Israel, and depriving them of regular family visits is not only cruel but also a blatant violation of international law, said Amnesty International, ahead of a mass prisoner’s hunger strike which begins next week, to mark Palestinian Prisoner’s Day on 17 April.

Testimonies gathered by the organization from family members and Palestinian prisoners detained in the Israeli prison system shed light on the suffering endured by families who in some cases have been deprived from seeing their detained relatives for many years.

“Israel’s ruthless policy of holding Palestinian prisoners arrested in the Occupied Palestinian Territories in prisons inside Israel is a flagrant violation of the Fourth Geneva Convention. It is unlawful and cruel and the consequences for the imprisoned person and their loved ones, who are often deprived from seeing them for months, and at times for years on end, can be devastating,” said Magdalena Mughrabi, Deputy Regional Director for the Middle East and North Africa at Amnesty International.

“Instead of unlawfully transferring prisoners outside the occupied territories, Israel must ensure all Palestinians arrested there are held in prisons and detention centres in the Occupied Palestinian Territories. Until then, the Israeli authorities must stop imposing excessive restrictions on visitation rights as a means of punishing prisoners and their families, and ensure that conditions fully meet international standards.”

According to the PNN, Palestinian prisoners preparing to embark on next week’s large scale hunger strike are making a series of demands including calling for an end to Israel’s restrictions on visits and contact with family members. Palestinian detainees held on security grounds are barred from making phone calls to their families. The hunger strike was announced by imprisoned Fateh leader Marwan Barghouthi. A number of other political parties and prisoners have announced they will be joining the strike.

Under international humanitarian law, detainees from occupied territories must be detained in the occupied territory, not in the territory of the occupying power. They must also be allowed to receive visitors, especially near relatives, at regular intervals and as frequently as possible.

According to the Palestinian Prisoner’s Society, there are currently 6,500 Palestinian prisoners, including at least 300 children, detained on security-related grounds in Israeli-run prisons and detention facilities. All but one of the 17 facilities are located inside Israel.

The vast majority of prisoners are men, 57 are women, including 13 girls under the age of 18. Thirteen of those imprisoned are Palestinian Legislative Council members. At least 500 people are held without charge or trial in administrative detention, a practice which flouts safeguards required by international law to prevent arbitrary detention.

The Palestinian Prisoners’ Affairs Commission spokesperson Hasan Abed Rabbo said that at least 1,000 prisoners are prohibited from receiving family visits on “security grounds”. He added that currently there are around 15-20 prisoners held in isolation, who are banned from any contact with other prisoners and family visits.

“Ahmed”, a 32-year-old from Hebron currently held in administrative detention in Ketziot prison in the Negev/Naqab desert, whose name has been changed to protect his identity, has only had one family visit, despite spending five and a half years in an Israeli prison, on and off between 2005 and 2017.

He told Amnesty International that he was joining the mass hunger strike in the hope that it will pressure the authorities to allow his 70-year-old mother, who has been repeatedly denied a permit, to visit him. He said he had been arrested seven times in total. His administrative detention order is up for renewal on 29 July.

“I have had one family visit while in jail. In 2006 my mother and father were able to visit me because my father was sick. He was 75 then, it was the last time I saw him. He died while I was in prison,” he said.“ No one can visit me, my mother is in her seventies and she is denied a permit for security reasons…I don’t know when I will be released or how long I will be in prison for, I want to be able to see my family.

The Israeli authorities are using the permits to punish me… I don’t know how long [my mother] has [left] and if I will be able to see her if or when I am released.”

Najat al-Agha, a 67-year-old woman from Khan Younis in the Gaza Strip, told Amnesty International that her son, Dia al-Agha, 43, has been imprisoned in Israel for the past 25 years. At the age of 19, he was sentenced to life in prison after being convicted on murder charges.

He is being held in Nafha prison in Mitzpe Ramon in the south. “I don’t know why I get rejected. I am 67 years old. What security threat am I to Israel? All I want is to see him and make sure he is well. I don’t know how long I will live, any visit can be my last. I am scared of dying without seeing him,” his mother said.

“Every time I apply for a permit I get rejected. It is almost a year that I haven’t seen my son, it is devastating. They are punishing us, they are trying to break us.”

According to Israeli Prison Service regulations, all prisoners are entitled to family visits once every two weeks. However, in reality, because Palestinians from the Occupied Palestinian Territories must apply for permits to enter Israel, they can visit much less frequently.

The Israeli Prison Service regulations also allow the authorities to rescind a prisoner’s right to family visits on security grounds.

Gaza prisoners continue to be most affected by Israeli restrictions as the Israeli military grants permits to families from the Strip only once every two months.

This policy affects around 365 prisoners from Gaza currently detained in Israel. In addition, Hamas prisoners along with other prisoners living in the same prison wings, are only permitted one monthly visit, irrespective of where they come from.

Since 1969, the International Committee of the Red Cross (ICRC) has been responsible for mediating and facilitating all aspects related to family visits, for prisoners from the West Bank and Gaza, without any logistical or financial assistance by Israel. West Bank and Gaza residents apply though the ICRC to receive permits and rely on them to arrange transportation to the prisons in agreement with the Israeli Prison Service. In July of 2016, the ICRC reduced the number of visits coordinated for prisoners’ families from the West Bank from two, to one a month. An ICRC representative told Amnesty International that the decision was taken in order to better manage ICRC resources, due to low family attendance for visits.

The reduction does not affect women, children and hospitalized prisoners and, since then, the ICRC has introduced three additional annual visits for all prisoners, during major holidays.

“Reham” (not her real name), a 27-year-old Palestinian woman from Ramallah, whose brother has been imprisoned in Israel for 15 years, was 12 when he was arrested. He is serving a 30-year prison term and is currently held at in Hadarim detention facility.

She said that the uncertainty of waiting for the outcome of an application for a visitors permit had placed considerable strain on her family.

Since October 2016, Reham was denied regular permits on security grounds, she now has to renew her permit following every visit. Her sick mother was only allowed to visit her brother twice in four years before she passed away. He was not permitted to attend the funeral.

According to Addameer Association, for most West Bank residents visiting detained relatives the journey to prison takes between eight to 15 hours depending on the prison and place of residence. Relatives of prisoners are subjected to lengthy body searches and sometimes strip searches.

“The Israeli authorities play with our emotions, they torture us and punish us. They try to break us to tire us, so that we would want to visit our relatives less because of all the humiliation, searches, abuse and insults by soldiers or prison guards,” Reham said.

In addition to calling for lifting restrictions on family visits, the hunger striking prisoners are making a series of demands including calling for an improvement of access to medical care; calls for increasing visit duration from 45 to 90 minutes; calls from women prisoners for family visits without glass barriers to allow mothers to hold their children; an improvement in detention conditions including easing restrictions on the entry of books, clothing, food and other gifts from family members; restoring some educational facilities; and installing phones to enable prisoners to communicate with their families.