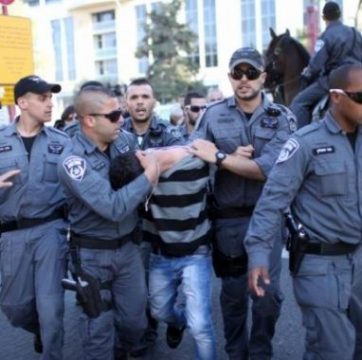 An Israeli court sentenced, Wednesday, a 14-year-old Palestinian child from Jerusalem to 100 days in prison, and a 2400 Israeli shekels fine, after he was held under house arrest for nine months.

The Palestinian Prisoners Society (PPS) said the child has been identified as Fadi Shalloudi, 14, from the al-Bustan neighborhood in Silwan town, in Jerusalem.

The child has been repeatedly detained by the army, in addition to his brothers, Samer, 17, and Bassel, 15, and their mother Shifa.

In related news, the district court in Jerusalem ordered the release of a child, identified as Jihad Mohammad Shalabi, and forced him under house arrest for five days.

Israeli soldiers kidnapped the child, on Tuesday morning, from the courtyards on the Al-Aqsa Mosque.

Issa Qaraqe’, the head of the Palestinian Detainees’ Committee, denounced the escalating Israeli violations against Palestinian children, and said that at least 65 children from Jerusalem have been detained, then forced under house arrest, since the beginning of this year.