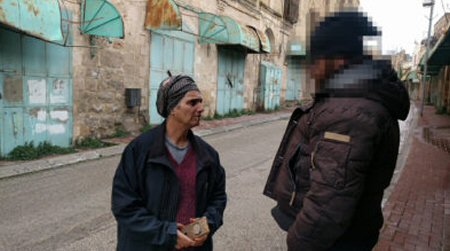 ISM volunteers were detained by Hebron Police for over 8 hours after Anat Cohen assaulted them outside the Qurtuba school checkpoint on Thursday.

In direct response to the violence waged against Palestinians at the hands of settlers (and the military that protects them), a neutral observer force had been present in Hebron (Al-Khalil) for the past 22-years, in part, to ensure that children walking to/from school would not be harmed, harassed, or murdered by settlers. This observer force was called TIPH.

One of the more dangerous checkpoints for Palestinian children in Al-Khalil exists outside the Qurtuba school–which is juxtaposed immediately adjacent to the Beit Hadassah settlement. Another independent observer group, EAPPI, had been peacefully monitoring this checkpoint until last week–when their head offices announced that their team would also withdraw from Hebron following a targeted campaign of harassment by the right-wing fascist group Im Turtsu.

To fill this void, ISM volunteers have been monitoring the Qurtuba checkpoint in mornings and afternoons to provide an international presence to ensure the safety of Palestinian schoolchildren. As a result, ISM has become the target of harassment by settlers. On Thursday, this ordinary verbal abuse escalated to physical assault when Anat Cohen–a particularly violent settler with a history of attacking peaceful observers–assaulted ISM volunteers at the Qartuba checkpoint.

ISM captured the assault on video:

The ISM volunteers vehemently deny these accusations, and they have video evidence clearly showing that the only physical violence that occurred was when Cohen assaulted the peaceful ISM volunteers, who were simply observing the checkpoint to ensure the safety of the schoolchildren.