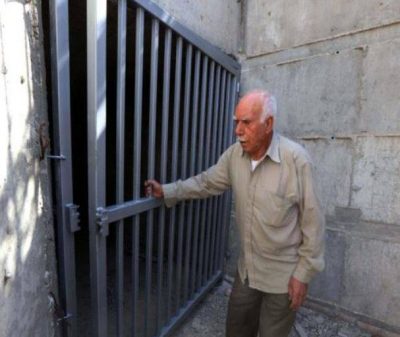 Although his family graveyard is now located behind the Annexation Wall in al-Walaja village, northwest of Bethlehem, resident Ahmad Barghouth (Abu Nidal) has continued to visit the graves of his father, mother and grandmother, by going through a special underground tunnel constructed by Israeli authorities when they constructed the Wall, to allow certain Palestinians with special permission to enter and exit.

But recently, Israel decided to block this tunnel with an iron gate, and now, the 70-year -old man is unable to reach the graveyard.

The Israeli army told him that the gate is part of new so-called ‘security measures’ related to the construction of the Wall, in addition to surveillance cameras in all surrounding areas.

In an interview with al-Quds.com news agency, Abu Nidal said that these measures are just meant to impose further restrictions on the Palestinians who are trying to enter their own lands and properties that became isolated behind the Annexation Wall.

This, he added, is just the first step before Israel completely confiscates the lands because, once the Palestinians cannot enter them, the occupation authorities consider them abandoned under Israeli law, and take control of them.

The family’s suffering began more than seven years ago when Israel decided to confiscate part of their land to build the Annexation Wall. When that happened, Abu Nidal managed to get an Israeli court ruling allowing the construction of a tunnel under the wall, so that he could reach his land and family cemetery.

The Palestinian elder and long-time farmer goes frequently to his land, to plant it, to harvest it, to care for it, while Israel has continued to build and expand its illegal apartheid wall, separating Abu Nidal and other Palestinians from their land in al-Walaja.

His condition is no different than other families in the area, for instance, Israel recently placed many iron gates at the entrance of a tunnel leading to the home of Omar Hajajla, in addition to erecting barb-wires and surveillance cameras.

Firas al-Atrash, a member of al-Walaja Village Council, told Quds.com that the various gates installed by the Israeli military are serious threats to the Palestinians, isolating and separating them from their own lands. This is especially difficult now that Israel has ordered the Palestinian to obtain special permits in order to enter these lands, and even those permits have various restrictions on them.

Al-Atrash added that the Israeli occupation authorities have the objective of isolating the Palestinians from their land, which is the first step towards illegally annexing and confiscating these lands, in order to build and expand Jewish-only colonies on Palestinian lands and link them with occupied Jerusalem.

It is worth mentioning that Israel has recently issued orders halting the construction of several homes, in addition to demolition orders targeting seventy other homes, under the allegation that they are “built on lands that are under Israeli control.