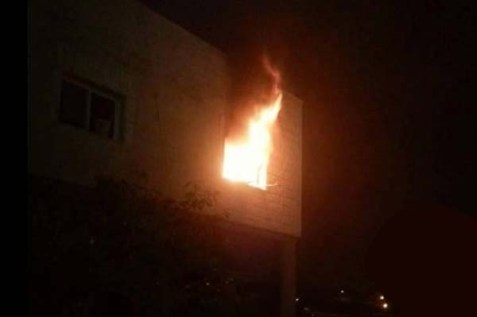 On Tuesday night, a Palestinian couple was nearly burned alive in their beds in the town of Douma, near Nablus, after a flaming explosive was thrown into the second story window of their home while they were sleeping.

The attack came just days before the one-year anniversary of the horrific arson attack on the Dawabsheh family, in which an 18-month infant and his parents were burned to death, and a 4-year old child was the only survivor, with severe burns all over his body.

In the attack on Tuesday, unknown persons threw a flaming explosive through the window at about 3 am, but the couple heard a noise and woke up, and were able to escape uninjured. There was extensive damage to their home.

Israeli police say they are investigating Tuesday’s attack, which is the third such incident since the Dawabsheh family was killed last year.

Although the Israeli police and some Israeli media say that they believe there is a possibility that this attack was due to an ‘internal dispute’ between families, villagers from Douma say there is no merit to this claim.

Some commentators in the Israeli press have gone so far as to claim that “arson is how the local clan, the Dawabshehs, are known to settle their internal accounts” (July 20 article in jewishpress.com), but local villagers say that such claims are blatant attempts to smear the victims of the numerous attacks.

Some Douma villagers say the Israeli press and authorities are attempting to create a false narrative in order to avoid investigating the Israeli settlers who, they say, are responsible for all of the recent arson attacks in Douma.

The Palestinian Authority official in charge of monitoring Israeli settlement activity in the West Bank, Ghassan Daghlas, condemned the attack on Tuesday and called for a full investigation of the crime.

In June, the main suspect in last year’s fatal attack on the Dawabsheh family, Meir Ettinger, was released from Israeli administrative detention. Ettinger is the grandson of the notorious anti-Palestinian rabbi, Meir Kahane.

The other dozen suspects who were arrested in connection with the crime were released in December. At that time, the Minister of the Israeli army, Moshe Ya’alon, said in a statement, ‘The perpetrators of the crime of Dawabsheh family’s arson attack are identified for us, but there is no evidence to bring them to trial or to charge them.’

The main witness in the case, a relative of the family who was killed, has suffered from severe intimidation, including an attempt to burn him and his wife alive.