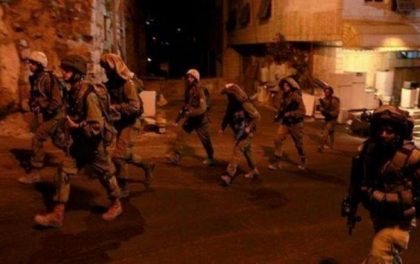 Israeli soldiers invaded on, Thursday at dawn, Beit Awwa town, in the southern West Bank district of Hebron, stormed and ransacked several homes before kidnapping one Palestinian, and summoned two others for interrogation.

In addition, the soldiers invaded Doura town, before breaking into the homes of resident ‘Ayed al-Faqeeh and his imprisoned son, Yousef, and violently searched the two properties before summoned four siblings for interrogation.

The four have been identified as Akram, Mohammad, Firas and Nafez Jabara al-Faqeeh; they were all order to head to Etzion military base for interrogation.

Owners of some of the invaded homes have been identified as Majdi Mousa Shreiqi, his brothers Ahmad, and Eid al-Jondi.