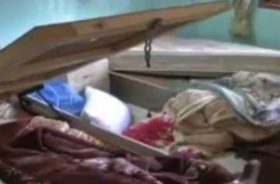 The Tulkarem office of the Palestinian Prisoners Society (PPS) said the soldiers surrounded a residential building, before smashing the door of one of the apartments, and kidnapped a former political prisoner, identified as Ghassan Saleh Barqawi, 33, after searching and ransacking his residence.

His wife told the WAFA Palestinian News Agency that the soldiers interrogated the family while violently searching their apartment, and kidnapped him after cuffing and blindfolding him.

It is worth mentioning that Ghassan is a former political prisoner who was released from Israeli detention in 2009, after spending seven years in prison.