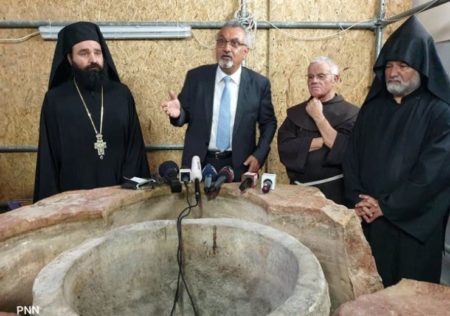 Al Bandak announced that, during the restoration works on the octagonal-shaped baptismal font that is located in the church’s southern wing, an additional circular baptismal font was found concealed inside the current font which, according to preliminary investigations and analysis, is made from the same stone used for the church pillars.

Al Bandak stressed that archaeological studies and investigations are still ongoing to gain further knowledge about the church history and its valuable archaeological features, and that the baptismal font will be restored by experts based on international standards. The Presidential Committee issued a call for experts from the Palestinian Ministry of Tourism and Antiquities, in addition to international experts, to participate in the archaeological study and analysis of the discovered font.

Al Bandak added that this important discovery would grant experts further knowledge about the church’s history, its importance across the various historical periods, and the significant role it leadership, headed by His Excellency President Mahmoud Abbas, to complete the necessary restoration works in accordance with the highest quality and standards.

Coordinating and cooperating with the three churches, in order to preserve the church’s religious, cultural and historic significance for the whole world is ongoing, and the responsibility of the State of Palestine to safeguard it for future generations is unshaken. These efforts are conducted within the framework of efforts conducted by the Palestinian leadership to promote Christian presence in Palestine and the Holy Land.

Under the auspices of the State of Palestine, an international celebration for the completion of the restoration works was scheduled to be held this October. However, to grant the wish of the three custodial churches – the Greek Orthodox Church, the Custody of the Holy Land, and the Armenian Patriarchate – to restore the Grotto, which is the most sacred and most significant part of the Nativity Church, the celebrations will be held in May 2020, PNN reports.