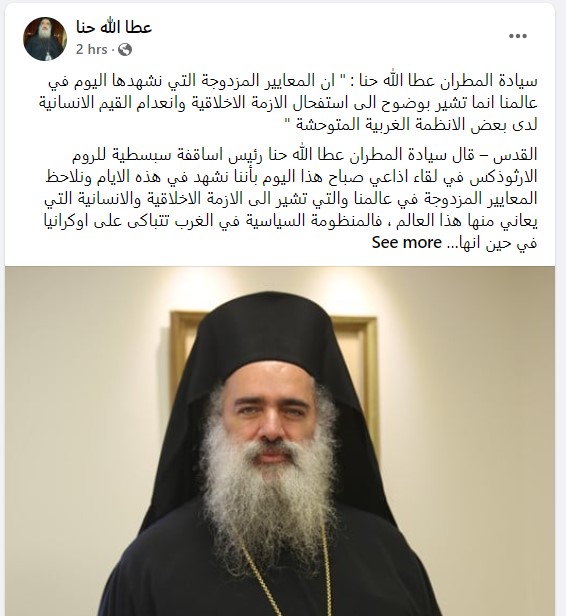 Archbishop of Sebastia from the Greek Orthodox Patriarchate of occupied Jerusalem, Theodosios Atallah Hanna, denounced the international double standards and the immorality of many regimes condemning the war in Ukraine while ignoring the constant suffering of the Palestinians under Israeli occupation.

“These international double standards in our world clearly show the deep levels of the state of immorality and lack of human values many western regimes have reached,” Father Hanna said.

“We stand with solidarity with victims of war, especially the civilians who have nothing to do with it, and we also have to ask ourselves why those countries are condemning the war in Ukraine and at the same time ignoring the victims of wars they created in several parts of the world,” Father Hanna stated, “America and its allies destroyed Iraq and committed war crimes against its people, and we are witnessing what is happening in Syria and all the devastations of wars they created in the region.”

“In Palestine, the people continue to suffer ongoing Nakba, facing racism, oppression, and injustices inflicted on our people by the Israeli occupation; however, we have not seen those elevated levels of condemnations from those countries similar to what we are witnessing with Ukraine,” he added, “Don’t the Palestinians deserve this solidarity, this support?! After all those years of ongoing occupation, injustice, and oppression?!”

“What we are witnessing now is another proof of the ugliness of western politics, it is abundantly clear how they do not care about humanity, human rights, and dignity, but are only interested in their agendas, political and colonialist interests,” he said, “Israel is ongoing with its serious assaults and violations against the Palestinians, especially in Jerusalem, and its army is even bombing Syria….”

“We aren’t supporting the war in Ukraine; we do not support wars, but many who are condemning this war are ignoring the suffering of the people of Palestine, Iraq, Syria, and several other countries,” he added, “Many nowadays do not trust western politics, and we believe this war will have dire consequences and will lead to changes that nobody expected or anticipated.”

Father Hanna also expressed his hope that this war would end, adding that the world needs the language of dialogue and understanding to end these conflicts.