Archbishop Hanna: Palestinians Do Not Accept Any Deal at Expense of Cause 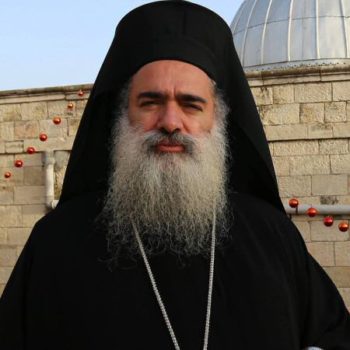 Palestinian Archbishop Sebastia Atallah Hanna has declared that Palestinians do not accept any a deal at the expense of their national cause, and that they will foil every conspiracy which aims to erase it.

Hanna said, during a meeting with a media Brasilia delegation, on Tuesday, that the city of Jerusalem has its place and sanctity in the three monotheistic religions. It is the city of peace, but the peace of Jerusalem is absent due to the crimes that have been committed against it, and the right of its sanctities, endowments and national institutions.
He stressed, according to Al Ray, that Palestinians are treated as strangers in the city, saying that Israel has attacked its sanctity and the Palestinian presence.
He expressed Palestinian rejection of U.S. President Trump’s declaration regarding Jerusalem, and that no political body has the right to make Palestinians as guests in their city:
“We declare our rejection of the deal of the century, which is intended to eliminate the Palestinian issue and wipe it totally. “
He noted that Palestinian Christians are an inseparable part of Palestinian people, stressing that the Palestinian cause unites Palestinians who are in agreement on Jerusalem as their capital.
Human Interest 03/14/18: Roger Waters Recites Verses by Mahmoud Darwish in New Song