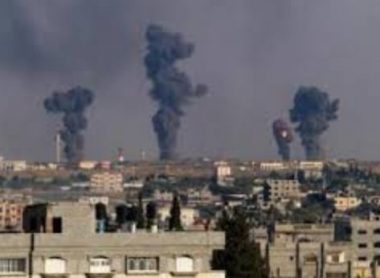 Israeli soldiers injured, on Thursday morning, at least one Palestinians and caused excessive property damage, after the army fired missiles and shells at many targets in the Gaza Strip. The army claims the escalation started after an explosive targeted a military vehicle near the border fence.

Media sources said an Israeli drone fired three missiles at a site, east of Beit Hanoun, in the northern part of the Gaza Strip, causing excessive property damage, and moderately wounding one Palestinian, who was rushed to a hospital in nearby Beit Lahia.

They added that the soldiers fired dozens of live rounds at many homes and property, in the eastern part of Beit Hanoun, causing damage.

Furthermore, Israeli tanks stationed in Nahal Oz military base, across the border fence east of Gaza city, fired six shells and dozens of live rounds at homes and farmlands, in addition to two sites, run by the Al-Qassam Brigades, the armed wing of Hamas, east of Gaza, and near Jabalia, in the northern part of the coastal region.

Medical sources in Gaza said ambulances, and rescue teams, were unable to reach several targeted areas, especially east of Gaza, due to the intensity of Israeli fire.

Israeli sources said several explosive devices were detonated by armed resistance groups, near the border fence, in northern Gaza, and added that the shells did not lead to damage or casualties.