Archbishop Hanna: “The Palestinians Have The Right To Defend Themselves, Protect Their Rights” 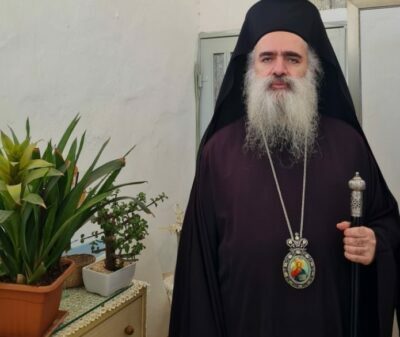 Theodosius (Attallah) Hanna, the Archbishop of Sebastia from the Greek Orthodox Patriarchate of Jerusalem, stated that the Palestinians have the right to defend themselves and to act on protecting their legitimate rights in the struggle for freedom and independence.

Father Hanna said freedom is never presented to the people on a golden plate but is achieved by the people who struggle for their liberation, just as so many nations around the globe achieved their freedom through resistance, struggle, and ongoing determination, despite the huge sacrifices and the suffering.

“We reject all attempts and policies that aim to label the struggle of our people as terrorism; every person who believes in freedom and justice, must support the Palestinian struggle,” he said, “When we presented Kairos document, we stressed the fact that nonviolent resistance and struggle for freedom is part of our moral and spiritual values.”

“Our people believe in their legitimate rights and are determined to achieve them on this Holy Land. Those who think that the Palestinians will ever surrender, and abandon their rights, are wrong, because the Palestinians will not surrender, and will always reject all attempts, and suspicious initiatives that only aim at assassinating their legitimate cause. We believe in what is right, we believe in justice, and will always send the same message to the entire world, until justice is achieved.”