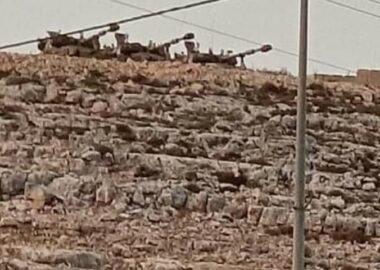 Israeli soldiers conducted, on Tuesday at night and Wednesday morning, live-fire military drills near the villages of Toura, Taybeh, and Thaher al-‘Abed, southwest of the northern West Bank city of Jenin.

Local sources said dozens of soldiers were deployed in Palestinian olive orchards and farmlands, while several armored vehicles were also roaming in the area during the drills that involved the use of live fire.

The sources added that the Palestinians have been denied access to their farmlands and orchards during the drills, while dozens of soldiers were also deployed near Ya’bad town and all surrounding villages, before closing many roads and areas.

Similar drills were also carried out two days ago, and last week, in the same areas of Jenin; the Israeli army conducts dozens of drills every year in several parts of the occupied West Bank.

These training drills, conducted by the Israeli occupation army, have led to massive destruction of lands and other property, burning hundreds of dunams of farmlands, in addition to displacing hundreds of Bedouin families, and causing dozens of casualties, including fatalities.