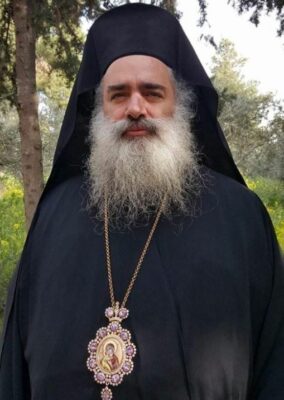 Theodosius Atallah Hanna, the Archbishop of Sebastia from the Greek Orthodox Patriarchate of occupied Jerusalem, stated that the trade deals between some Arab countries that normalized relations with the illegal Israeli colonialist occupation of Palestine are war crimes.

In a statement released Saturday, Archbishop Hanna stated that the trade deals between those countries and Israel, including deals to import products from Israel’s illegal colonies, are nothing less than war crimes.

“Colonies are built on lands that were stolen from the Palestinian people; therefore, trade deals with them are illegal, and are nothing short of an attempt to legitimize and legalize crimes,” he said, “These suspicious deals are a complete disregard of the just and legitimate Palestinian cause, a cause we should always defend.”

He also called on the Arab states that are normalizing ties with the illegal occupation to correct their grievous paths, and to stand in full support with the occupied Palestinian people, who have been subject to ongoing injustice, instead of siding with an illegal colonialist occupation.