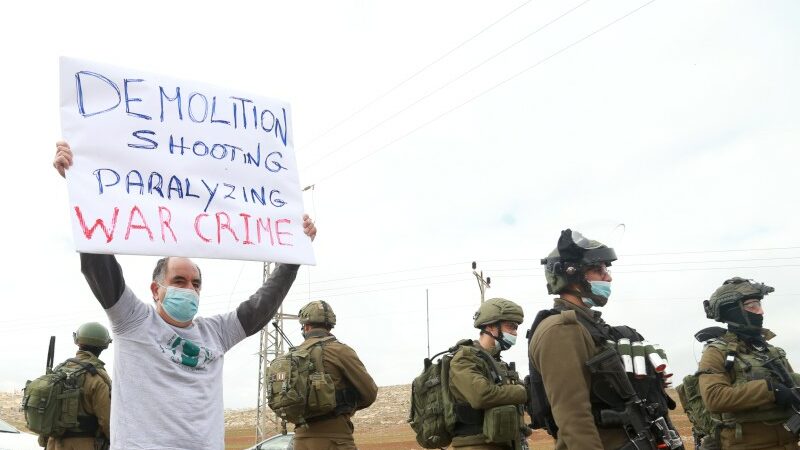 On Friday, Israeli occupation forces suppressed the weekly march organized in the village of At-Tuwani, south of Hebron, in solidarity with Harun Abu Aram, who was shot and paralyzed last month by the Israeli troop’s gunfire. Since early morning hours, troops set up a checkpoint at the village entrance and tried to prevent solidarity activists from several NGOs and journalists to get into the village. activists managed to enter through an agricultural road adjacent to the main entrance.  Residents prayed at the entrance, and then marched, trying to reach the land where Harun Abu Aram was injured.

Soldiers prevented the march from advancing and assaulted demonstrators, fired sound bombs at them, and then arrested Suleiman Al-Hathrin after they attacked him. Combatants for Peace activist sustained light wounds in her leg after she was pushed to the ground by one of the soldiers.

Fouad Al-Amor from the Committee of southern Hebron and Masafer Yatta explained, “We are here today in solidarity with Harun Abu Aram, who is lying in the hospital after being shot by the occupation soldiers. We denounce these barbaric policies by the occupation that targets Palestinian communities, and we affirm that we will organize an event every Friday.” Elie Avidor from Combatants for Peace said, “I am here to stand by the people of At-Tuwani village and demonstrate against the demolition of homes and against the shooting of Harun Abu Aram … I say to the State of Israel there will be no peace as long as the occupation exists.”

Israeli occupation soldiers shot Harun Abu Aram last month, causing him complete paralysis, when he was trying to prevent them from confiscating his power generator.